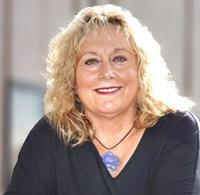 Darlene Estey first got active in Local 1000 because she was mad–at her union.
“I used to be a fee payer, and I was angry about a dues increase so I became a member and got active,” said Estey, a Bargaining Unit 1 senior compliance representative with the Franchise Tax Board. “Once I saw how the union worked to help people, I just got more and more involved.”
That was in 2007. Since then she has become a steward, served as District Labor Council 786 president and is currently taking a six-month union leave to represent members in the Member Resource Center (MRC).
“Working on the front lines of the representation process has really opened up my eyes,” Estey said. “At the resource center, I hear first hand about the problems members have at work, and I’m reminded every day how important it is to have a union.”
Helping the disabled
Even though she has been involved in Local 1000 for about five years, she has been an activist all of her life.
“I’ve never been the kind of person who sits on the sidelines and just complains,” said Estey, a 25-year state employee. “If I want something to improve, I would rather roll up my sleeves and get to work.”
While growing up in the Amador County town of Plymouth, she volunteered at a program for the mentally disabled near her elementary school.
“It instilled in me a sense of wanting to look out for the underdog, to help people who genuinely need help,” Estey said. “Everybody should have a chance to succeed.”
Political action
Her values led her to serve on the Plymouth City Council and then as the city’s mayor. Her political activism continued this fall when Estey phoned voters several nights a week to help us pass Proposition 30 and defeat Proposition 32.
“After working in a call center all day, you’d think I get tired of talking on the phone, but it energized me to help voters understand the issues,” Estey said. “Politics can be frustrating, but it’s rewarding to have a chance to solve problems and make a difference for people.”