Fighting Back Against Unfair Practices at State Lottery 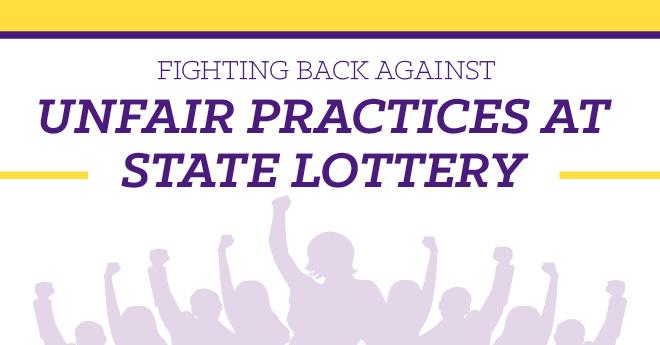 Our union has filed an Unfair Practice Charge against management at the California State Lottery, challenging its anti-union campaign and mistreatment of employees.

Approximately 180 employees in the classification of District Sales Representative (DSR) are affected by a widespread management campaign to smear the union and retaliate against employees who participated in and won a $1.5 million settlement after the Lottery denied overtime pay to hourly employees wrongly treated as exempt.

After good faith negotiation of this important settlement, Lottery management engaged in a campaign designed to punish employees for objecting to the Lottery’s mistreatment of their hourly status.

After the settlement, working conditions were unilaterally changed –– to restrict and track the employees on their routes, to deprive them of beneficial working conditions and to replace them with onerous and unsafe alternatives, as well as to malign and insult any union association for the purpose of targeting and blaming the union as the cause for management’s retribution.

The 180 affected employees help ensure that Lottery tickets and supplies are distributed statewide for sale to the public. In just the last six months, the Lottery has supplied $1.3 billion to the State’s education system. This billion-dollar boost to our state’s budget would not function without the hard work of DSRs who ensure that the Lottery’s product is available for purchase.

“We are sending a message that we won’t tolerate backlash; we won’t be victims. My union fought for us when the Lottery denied us overtime, and they’re fighting for us again,” said Paulina Vasquez, a DSR in Fresno. “I’m thankful I have a union to push back against management’s bad behavior.”