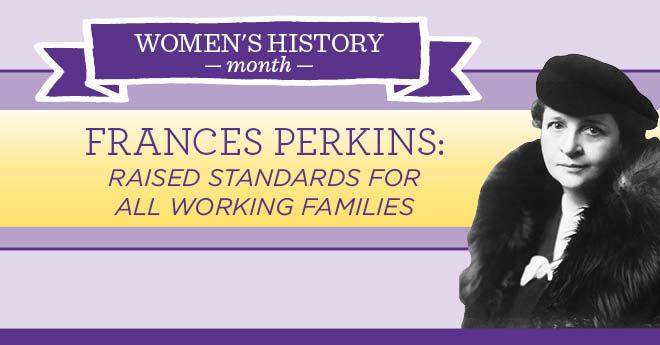 This month we’re celebrating the achievements of women including their great contributions to social, economic and environmental justice throughout history.

One woman who made such an impact was Frances Perkins, a workers’ rights advocate who served as the U.S. Secretary of Labor from 1933-45, the longest time anyone has served in that position and the first woman appointed to the U.S. Cabinet.

Called the principal architect of the New Deal, she spent a lifetime creating better opportunities for women in the workplace and better standards for all working families.

Early in her career, Perkins was driven by the Triangle Shirtwaist Factory fire in 1911, where she witnessed in horror as 47 workers, mostly young women, jumped to their death as fire engulfed the building and ultimately took the lives of 146.

She became Executive Secretary of New York’s Citizen Committee on Safety and worked to prevent further tragedies in the city’s factories.

Perkins died in 1965. Her contributions to social justice and workers’ rights carry on today.