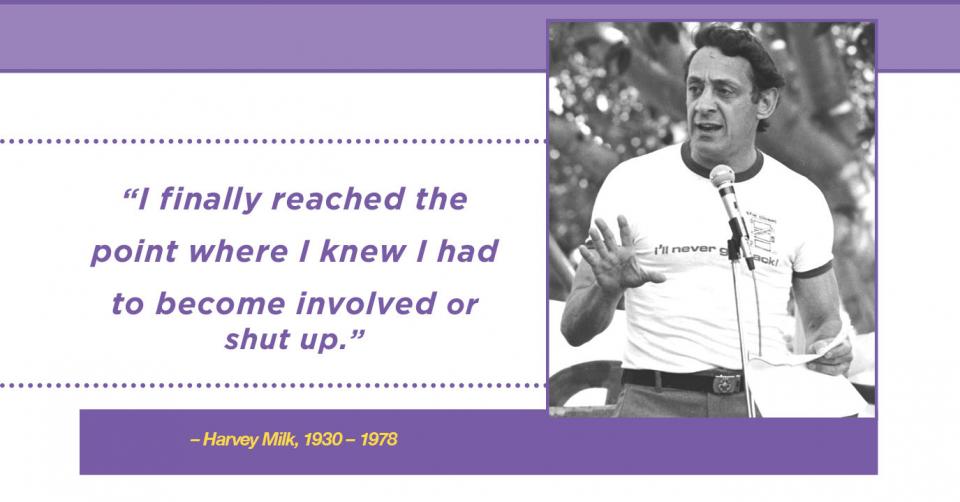 Harvey Milk made history in 1977 as the first openly gay elected official in California, and one of the first in the nation, when he won a seat on the San Francisco Board of Supervisors.

It was just one of his many accomplishments as a revered community activist that came in an era when Gay Rights became synonymous with Civil Rights.

As the owner of a camera store in San Francisco’s Castro District, Milk experienced many forms of anti-gay discrimination in both his personal and professional life.

Frustrated by the discrimination faced by the gay community, and by a bureaucratic and inefficient local government, Milk became more politically active. “I finally reached the point where I knew I had to become involved or shut up,” he said.

He organized opposition against Proposition 6, the so-called Briggs Initiative, which would have banned gays and lesbians, and anyone who supported Gay Rights, from working in California’s public schools. They successfully defeated the bill by a landslide vote.

He also formed a historic alliance with the Teamsters in an effort to end the staggering gender, race and labor discrimination policies at Coors Beer. Those policies including terminating employees suspected to be pro-labor or gay.

Milk’s camera store and the apartment above became a center of community activism for a wide range of human rights issues. As supervisor, Milk helped pass a groundbreaking city ordinance that prohibited anti-gay discrimination in housing and employment.

Slain by an assassin’s bullet in his Supervisor’s office at City Hall, Harvey Milk’s legacy is a reminder that organizing and activism can change the world, and that by speaking with a unified voice we have the power to demand social and economic justice for all of us.