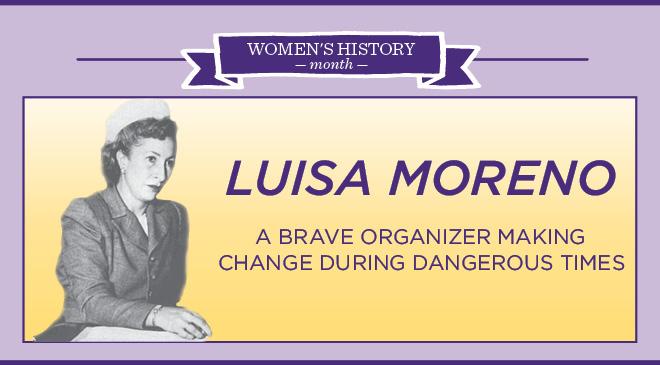 There are many examples of women in labor whose actions led to dramatic change in the social and economic landscape. What’s easily forgotten is that many stood up and exposed themselves to great personal danger while fighting for that change.

Luisa Moreno, a Guatemalan immigrant, worked as a labor activist in the 1930s, 40s and 50s in a half dozen states. Her story serves as a reminder of just how dangerous the conditions were in those days to simply make one’s voice heard, but her bravery helped change those conditions for the better.

Working at Zelgreen’s Cafeteria in New York City, she and a coworker protested the employer’s exploitation of its workers with long hours, constant sexual harassment and the threat of dismissal, should anyone object to the treatment.

Arriving one day at the cafeteria door—which was blocked by police—she pulled a picket sign from under her coat and yelled, “strike.” Two officers lifted her off the sidewalk, hustled her away from the scene; she returned shortly with her face bleeding … and spent the next 20 years organizing workers across the country.

She later organized African-American and Latina cigar makers in Florida. She became a representative of the United Cannery, Agricultural, Packing and Allied Workers of America, where she organized workers in Texas and California during the 1930s.

Moreno was a staunch advocate for the rights of immigrants, especially from Latin American countries. In the 1950s, she was targeted by immigration officials because of her politics and activism. She was offered citizenship in exchange for testifying against a labor leader, but she refused, stating that she would not be “a free woman with a mortgaged soul.” She was soon deported, but her brave approach to improving issues of immigration, employment and civil rights left a lasting impact on labor.