Ida B. Wells Crusader for Justice 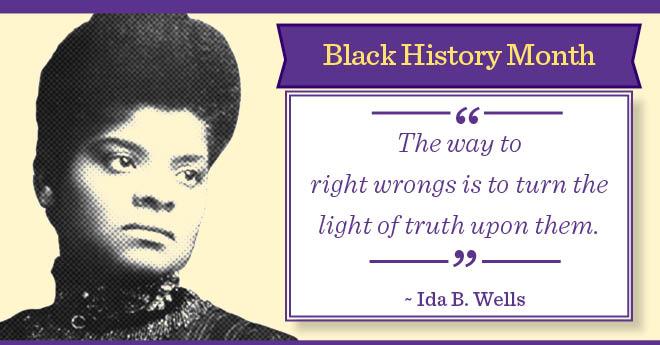 Among the many crusaders in black history who fought for racial and social justice is a school teacher, journalist and activist named Ida B. Wells.

The end of Reconstruction in the southern United States in the late 1870’s brought decades of mob violence against black people, including lynching.

Wells was one of the most outspoken voices against this form of violence and was a founding member of the NAACP. Her activism helped lay the groundwork for future generations of leaders, such as Local 1000 Bargaining Team member and NAACP Fresno President LeRoy Candler, Jr.

Wells was born in Holy Springs, Mississippi, in 1862 and attended Shaw and Fisk University, a rare achievement at the time for any woman.

As a teacher in a segregated school, she was angered by the fact that white teachers were paid $80 a month and blacks were only paid $30. This disparity fueled a growing political awareness and passion for justice that got her involved in the struggle for civil rights and the feminist movement as a journalist and activist.

Ida B. Wells moved to Tennessee and spoke out against the horrors of lynching in the south. Pamphlets like “Southern Horrors: Lynch Law in All Its Phases,” released in 1892, documented the practice and reviewed specific cases in detail.

As a result of her activism, a mob destroyed the offices of “The Free Speech,” a newspaper she founded and wrote for. She moved to Chicago out of fear for her safety.

She went on to partner with other great leaders of her time, including Frederick Douglass and W.E.B Dubois, on boycotts and campaigns.

Wells continued her activism in the 1920’s and started an autobiography called “Crusade for Justice” in 1928. She died in 1931 at the age of 68, but her legacy lives on.

Because of all the hard work of Ida B. Wells, and other activists in the anti-lynching movement, this cruel and cowardly act decreased significantly in the last half of the 20th century.

Despite several legislative attempts to outlaw lynching, Congress failed to act. It wasn’t until 2005 that the Senate passed a resolution apologizing to lynching victims, survivors and their descendants.