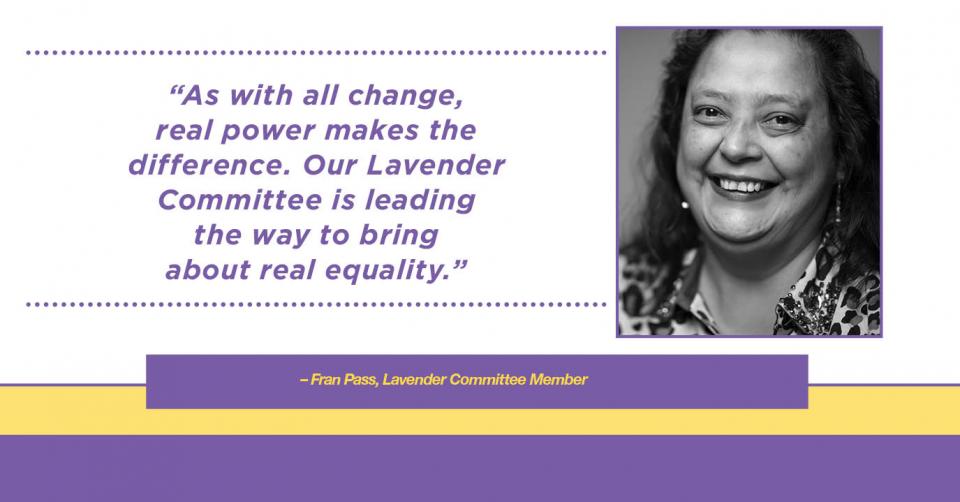 Our celebration of LGBTQI Pride Month honors the work of our union’s Lavender Committee and their fight for social justice here at home and on the national stage.

The Lavender Committee is comprised of committed leaders who are engaged at their workplaces and in their communities.

The Committee consists of Maria Patterson, the committee Chair, who works as a custodian at Caltrans in Stockton and is the Chair of Bargaining Unit 15; Thomas Perine, a Staff Programmer Analyst in Sacramento who’s also a senior job steward and long-time activist; Fran Pass, a Program Technician II at DDS in Sacramento, who is the president of DLC 768; and Garth Underwood, who works in Blythe as a Supervising Cook at CDCR. Like Patterson, he’s also a member of the Unit 15 bargaining team.

Together, the committee is responsible for reviewing policies and programs established by the state directly impacting LGBTQI members of Local 1000.

In addition, the committee works toward building a powerful alliance between labor and LGBTQI workers, helping both in the ongoing struggle for equal rights for all. Fighting for social and economic justice, our Lavender Committee helped bring transgender healthcare to CalPERS health plans. They continue that effort by advocating that all California healthcare plans are prevented from discriminating based on gender identity.

“As with all change, real power makes the difference,” said Fran Pass. “Our Lavender Committee is leading the way to bring about real equality.”