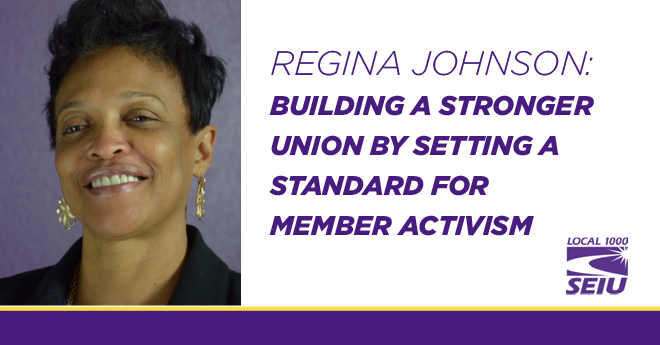 Regina Johnson, a member leader and steward at the California Department of Tax and Fee Administration (CDTFA) in Norwalk, is a shining example of what it takes to make our union grow and thrive.

She’s created one of the strongest networks of worksite member leaders in the state—able to activate dozens of her coworkers and fellow members to take action whenever it’s needed to protect our rights or to solve worksite issues. Engaged members are the backbone of Local 1000 as we work to build strength and power in the workplace.

Regina’s leadership journey began 14 years ago after a transfer from DMV to BOE (now CDTFA), where she quickly learned that the steward there had a negative attitude and was not enforcing the contract or educating members on their rights. As a result, her new colleagues didn’t have the most positive view of our union and didn’t have a positive relationship with each other.

Frustrated by that toxic environment and driven by her own penchant to solve problems, she received mentorship and leadership development from key union leaders who encouraged her to step up and make a difference.

Leora Hill, a longtime Local 1000 member leader and activist, whose contributions to the growth and strength of our union are commemorated with a scholarship granted annually by our African-American Committee, frequently visited Regina’s worksite, offering advice about the issues Regina and her colleagues were facing.

Regina became a union steward and immediately set out to change things in her worksite. “It was important to learn who my colleagues were and what they wanted in order to start building positive relationships,” she said. “They told me their stories about the horrible things management was doing. I started to educate my coworkers on their rights and the contract, and when they saw me winning grievances, people started to become more interested and engaged.”

Regina’s success as a Local 1000 leader is due in part to her philosophy: “Don’t think about the things that haven’t been done. Think about what can be done.

Today she’s building a stronger union by developing new leaders among the 16 member leaders in her worksite. “I’m keeping the legacy of Leora Hill alive by demonstrating that having a union means having a voice and empowering more members to use their own voice.”