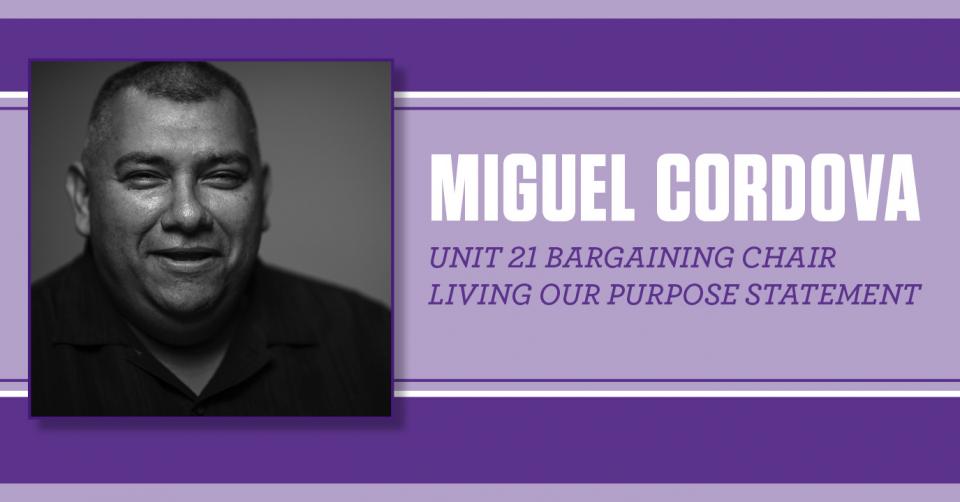 Miguel Cordova, our Unit 21 Bargaining Chair, believes in the Local 1000 Purpose Statement and, through his work as a committed union activist, is working to build a better workplace and a stronger community so all Californians have the opportunity to have a good life.

He’s a 20-year veteran of state service, working as an Educational Programs Consultant at the California Department of Education (CDE) in Sacramento. He stepped into his leadership in 2007, when state employees worked in an era of billions in budget deficits and Gov. Arnold Schwarzenegger’s minimum-wage threats and imposition of furloughs.

In 2007, he became a job steward, a District Bargaining Unit Representative for Unit 21 and a member of the Unit 21 bargaining team and has played a role in four different contract negotiations.

“I got involved with my union because I wanted to make sure that I, along with my coworkers, had the information we needed to protect our rights and fight attacks on our pensions and our jobs,” he said.

To that end, Cordova and the bargaining team won big on three issues of importance to Unit 21 members at CDE in our 2016 contract. They protected important language governing FLSA exempt status; obtained an 11.2% general salary increase over three years along with Special Salary Adjustments for Archivists and Transportation Consultants; and secured changes to educational leave provisions that allow Unit 21 members additional access to professional development and upward mobility.

Looking forward, Miguel is focused on building member strength in Unit 21 to ensure similar gains in our upcoming contract negotiations. “We can’t advance and make changes in our work environment unless we are ‘all in’ and standing together,” he says. “We need to be a strong union to prevent the endless attacks on what we’ve earned so far and to accomplish more in the future.”

Cordova is working to organize in the worksite and in the community to elect CDE’s new boss— the State Superintendent of Public Instruction. “We have to be active in support of SEIU-endorsed Tony Thurmond, to get out the vote,” he says. And, to ensure that his fellow rank-and-file workers have their voices heard by the new superintendent, Cordova and his Unit 21 team will hold a series of one-on-one conversations and brown bag lunches to gather and share workplace issues.

In addition to his union activism, Miguel Cordova is building stronger bonds in the Latino community through his leadership of Local 1000’s Latin@ Committee.

Our union reaches into the community to build relationships in many ways and, in May, we launched our “Somos Una Familia” event, an annual opportunity for area families to come together and celebrate music, art, food and the other traditions that define our lives.

“Building a stronger sense of heritage and culture for our community is a union value,” said Miguel Cordova. “We are demonstrating that we are all one family.”

Be part of the win—Click here to become a member today.