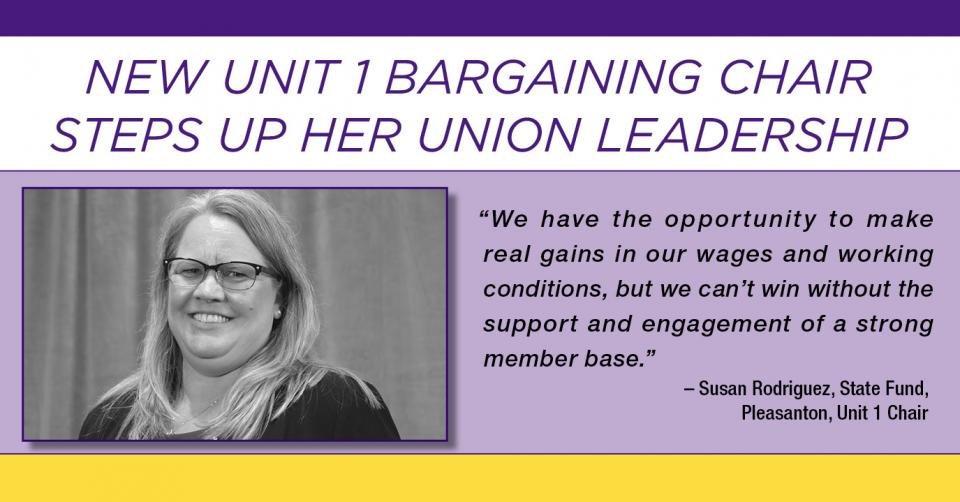 Susan Rodriguez stepped into her journey as a Local 1000 leader 11 years ago, when she decided to make a difference in her workplace and become a union steward. Today, she’s working to make a difference as the newly-elected Chair of Bargaining Unit 1 by building power among her fellow employees.

Along with the rest of our 20-member Unit 1 Bargaining Committee, Susan has already begun preparations for our upcoming contract negotiations. There’s a focus on increasing membership numbers because bigger numbers translate to more leverage at the bargaining table.

“We have the opportunity to make real gains in our wages and working conditions, but we can’t win without the support and engagement of a strong member base,” she said.

Susan Rodriguez is a 17-year veteran of state service and works as a Senior Workers’ Compensation Claims Adjuster in the State Fund office in Pleasanton. Her bargaining experience started in 2008 when she was elected to be a Unit 1 Classification Bargaining Unit Representative (CBUR). She also continues to provide strong leadership in her DLC 746.

In 2013, she was elected to the Unit 1 bargaining committee and helped negotiate our contracts in 2013 and 2016. As Unit 1 Chair, she’ll play an integral role in bargaining but reminds her fellow members, “if you really want something, you need to join the union, step up and engage.”

Have a voice in the direction of your union. Click here to become a member today.