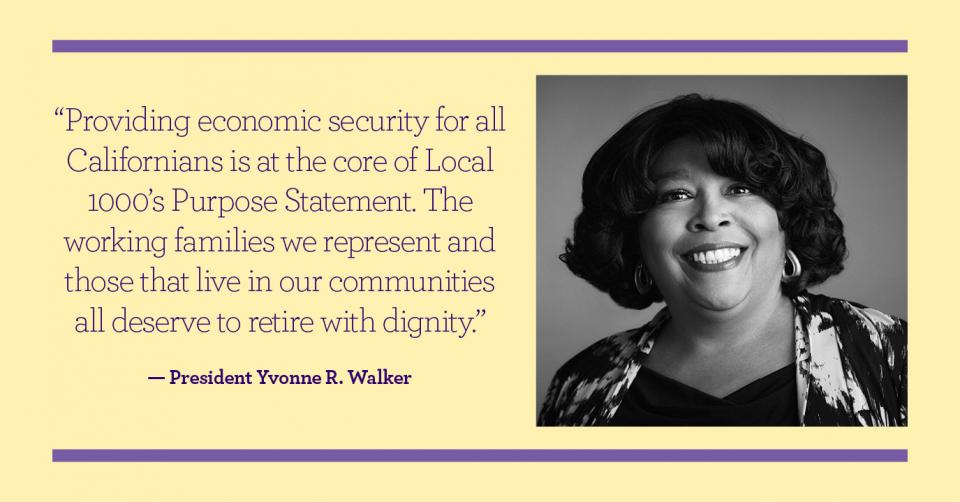 Having a strong, member-led union is necessary to protect our hard-earned wages and benefits, which include a good pension at the end of a career in state service. At the same time, our Local 1000 Purpose Statement guides our efforts to use our power to “give our members—and all Californians—the opportunity to enjoy the fruits of social, economic and environmental justice.”

California is facing a projected tsunami of senior poverty that will take its biggest toll on women, Asian Americans and Latinos who are a growing share of future retirees.

Fewer than half of private sector workers in the state have access to a retirement plan through their work and only about a third actually participate in a plan.

The most ambitious push to expand retirement security since the passage of Social Security in the 1930s became a reality in 2016 when Gov. Jerry Brown signed SB 1234 and launched the Secure Choice plan, that made retirement savings possible for more than seven million Californians for the first time in their lives.

CalSavers, the simple, automatic retirement savings plan will roll out later this year and enrollment will begin in 2019. It’s a voluntary retirement savings plan for millions of private sector, home-based and self-employed workers who currently don’t have access to a pension plan. Savings are made through voluntary payroll deductions, and the accounts follow the workers throughout their working years.

Our members helped bring Secure Choice from concept to reality; following through on our commitment to ensure every Californian has access to a dignified retirement. Thousands of our members shared their stories, sent letters or testified at public hearings across the state as the bill was passed and the new plan was shaped.

“Local 1000 members believe a safe and secure retirement should be available to everyone who works hard throughout their lives,” said Yvonne R. Walker, President of SEIU Local 1000 and Chair of the SEIU Retirement Security Committee. “The Secure Choice plan is a turning point in the history of our state – and our 96,000 represented workers are proud to have fought for a plan that closes the income gap for all seniors.”