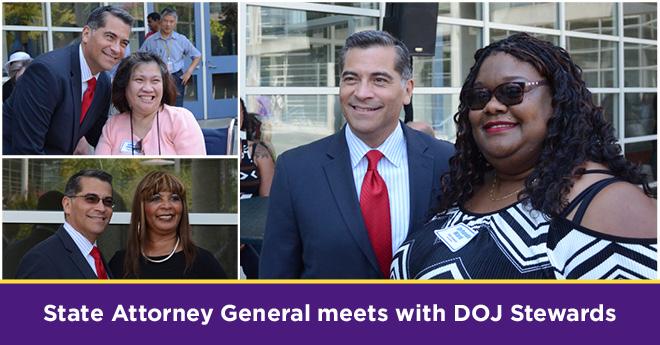 Stewards from across the state came together on Aug. 3 at the DOJ offices in Sacramento and spoke with Becerra about ways we can partner on improving DOJ working conditions and on upward mobility opportunities for our members.

Building relationships with elected leaders to improve our jobs and communities is the direct result of having a strong union.

“I’m glad I chose to be part of a union that’s earned the respect of elected officials and department leaders like Attorney General Becerra,” said Shrhonda Ward, a job steward and Program Technician II at DOJ/Broadway. “Leadership and member power have given us a seat at the table in making changes in our workplace.”

Becerra said he recognized the “indispensable work Local 1000 members do,” noting that “nothing clicks unless everybody works together.”

Becerra—the state’s first Latino Attorney General—has been a voice for working families throughout his career. He’s returning to his roots at DOJ, having served as a Deputy Attorney General about 30 years ago. In between, he served one term as a state assembly member and was a 12-term congressional representative in the U.S. House of Representatives, where he was the first Latino to serve on the powerful Ways and Means Committee.

“His work as a spokesperson for working people mirrors our union’s own purpose statement,” said President Walker. “He’s an advocate for providing all Californians a better life.”