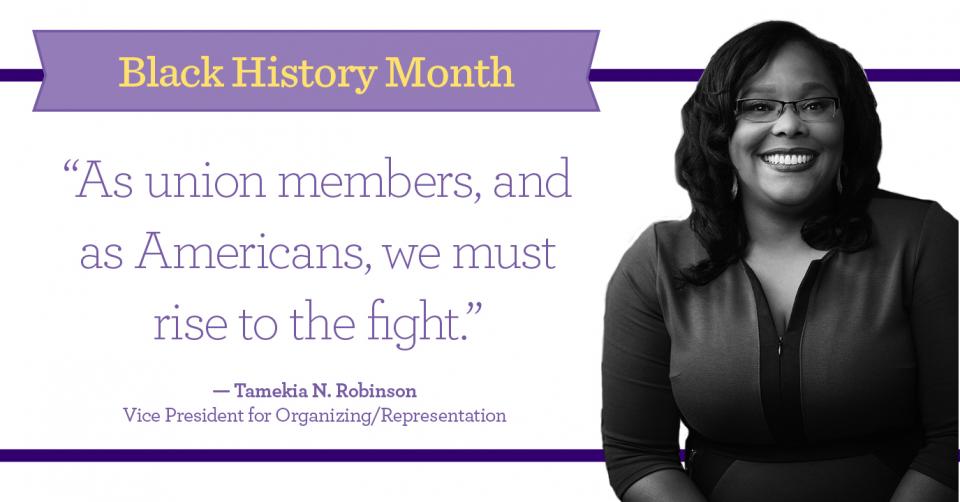 As our Vice President for Organizing/ Representation, Tamekia N. Robinson inspires members and leaders to a higher level of commitment to face today’s challenges. For her, Black History Month is an opportunity to pause and reflect on the inspiration she’s drawn from two legendary figures from our past: Fannie Lou Hamer and James Baldwin.

The life and achievements of voting rights activist Fannie Lou Hamer serve as a guide to Robinson’s personal journey as a leader of our Union. Hamer used her own struggles against racism to focus attention on the plight of African-Americans in the south. “She was unwavering in her commitment to black suffrage,” said Robinson.

Arrested in 1963, Hamer received a vicious jailhouse beating that left her with severe kidney damage and a permanent limp. A year later while speaking at the Democratic National Convention, she revealed to the nation the demeaning discrimination that black people were living under in the south and delivered the historic statement: “I’m sick and tired of being sick and tired.”

Baldwin, an essayist, playwright, novelist and social critic, was a highly regarded writer of his generation, whose insights into race, spirituality and humanity educated us about the stark realities of what it means to be black in America. As a child growing up in Harlem, he was regularly exposed to racial harassment and abuse and would later experience the same as a teenager. The themes of discrimination informed his life’s work, and he was an important voice in the Civil Rights movement.

“James Baldwin had so much courage and conviction,” said Robinson. “In a time when those who spoke up against the status quo faced withering criticism, Baldwin wouldn’t succumb.”

It is the strength of these leaders—Hamer and Baldwin—that drives Robinson today in her role as an officer and leader of Local 1000.

“As union members, and as Americans, we must rise to the fight. United together, we can use the lessons and leadership of history to protect our hard-earned rights at work and at home.”