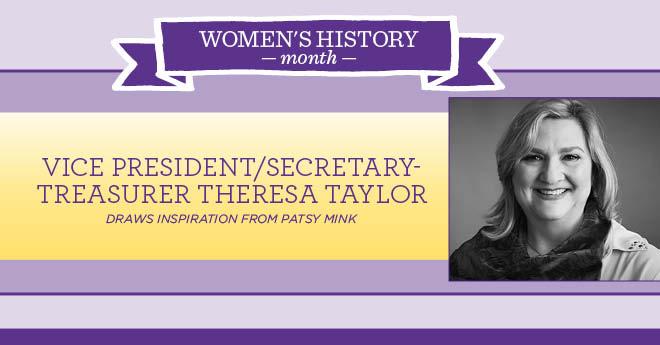 As we celebrate Women’s History Month, we reflect on the lasting inspiration we’ve received from courageous women who made our lives better today through their leadership.

For Theresa Taylor, our Vice President/Secretary- Treasurer, an inspirational leader who made a positive impact in her life is a woman named Patsy Mink, a political powerhouse and American pioneer who broke significant barriers in state and national politics.

Mink was the first woman of color and the first Asian-American to be elected to the House of Representatives, where she served six consecutive terms.

When Taylor was in college she was inspired by Mink and was eventually able to meet her.

“Patsy Mink became a leader by overcoming sexism, racism and the expectation that, as a woman, she would fail,” Taylor said. “Her perseverance in the face of seemingly endless challenges reminds me today that we can accomplish great things by keeping our goals in mind and never giving up.”

Mink – a Japanese-American – was elected student body president of her high school in Hawaii just one month after the bombing of Pearl Harbor and went on to fight injustices against women and Asians throughout her college years and her career.

Among her groundbreaking achievements as a legislator, Mink was the first Democratic woman to deliver a State of the Union response, which is the rebuttal speech delivered by a representative of the opposition party following the presidential State of the Union address.

She is best known as one of the principal authors of Title IX, the law responsible for tripling women’s college enrollment and greatly increasing their participation in sports over the last 40 years.

“We have to build things that we want to see accomplished, in life and in our country, based on our own personal experiences,” Mink said.

In recognition of her achievements, Congress in 2002 renamed the Title IX Amendment of the Higher Education Act as the “Patsy T. Mink Equal Opportunity in Education Act.”

Mink died in 2002 and leaves a legacy of leadership.