Another victory against bullying 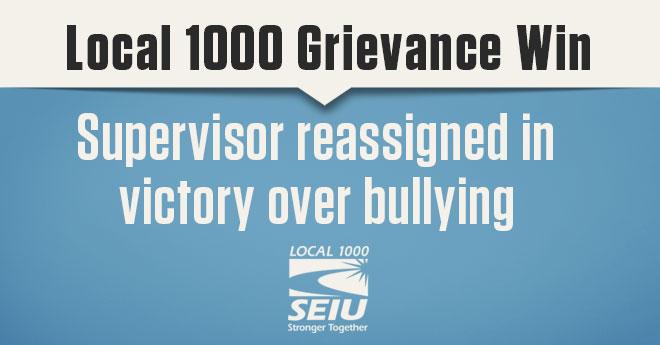 A supervisor at DGS has been reassigned and no longer manages workers after Local 1000 won a grievance against workplace bullying.

Local 1000 is committed to creating and maintaining emotionally healthy workplaces for the state workers we represent. We recognize that hostility and unprofessionalism are unsafe working conditions and we take these threats to our workers seriously.

Two DGS employees came to the union to get relief from an oppressive situation that was making the workplace unbearable for them.

A Local 1000 member there spoke up when she witnessed a coworker being harassed so badly that he had to go out on stress leave. His supervisor was singling him out, denying him advancement and embarrassing him in front of his colleagues—who were encouraged to join in the harassment.  The member who witnessed the harassment reports that when she called attention to her coworker’s mistreatment—and refused to take part in demeaning, so-called “team-building” activities that were bringing down morale—she became another target of that manager’s abuse.

Local 1000 filed a grievance to bring relief to both workers. The grievance went all the way to CalHR. When it got to that level, the state agreed to redirect both workers to new supervision. The bullying supervisor was placed on special assignment and doesn’t supervise workers anymore.

“Supervisors shouldn’t have the ability to make workers’ lives hell, and we will not stand for it,” said Local 1000 Vice President for Organizing/Representation Tamekia N. Robinson. “In this and many other cases where we’ve stopped workplace bullying, real representation made the difference.”