President Richard Louis Brown continues to fight for the represented members of Local 1000 by enforcing the contract and bringing Governor Newsom’s representatives to the bargaining table to negotiate issues like COVID protocols and a statewide telework agreement.

This past weekend we were reminded of how hard it is to break away from a union culture that is firmly entrenched in shutting out the majority of people they claim to represent.

In a darkened backroom of a building with the word “Democratic” above its doors and out of view from the membership, a small group of Board members moved to enact their anti-democratic agenda. While details are still emerging from this unauthorized and out-of-order meeting its core agitators Bill Hall (DLC 744), Theresa Taylor (DLC 786), Kevin Healey (DLC 752), Jerome Washington (DLC 749), Ruth Kiker (DLC 787), Francina Stevenson (DLC 794), Robert Gilbert (DLC 721), and Richard Wake (DLC 767) are well known.

On August 20, this small group of insurrectionists, led by DLC 744 President Bill Hall, delivered their anti-union, anti-democratic agenda to the Office of the President. The stated justification read like the children’s story of Chicken Little decrying “the sky is falling” and using terms that are commonly used to describe feelings, not facts.

SEIU Local 1000 first reported on these activities in a newsletter on August 31; A Coup Being Waged at SEIU Local 1000. Their insurrectionist’s first order of business is defined by the strikethrough edits to the Bylaws. 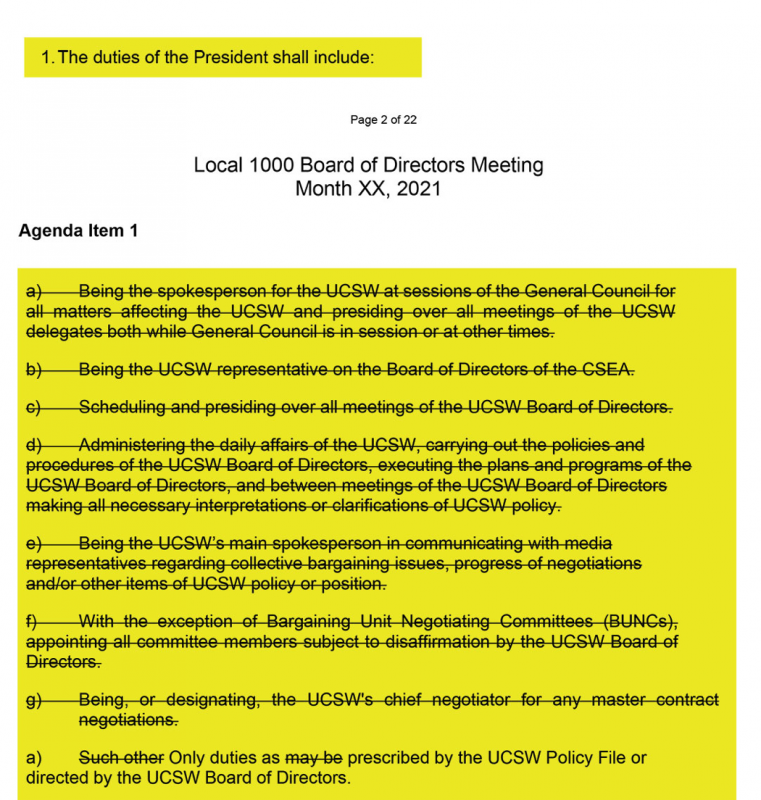 In under two months, this small cabal of hardline loyalists will tell you they had seen enough and made the decision to represent their own interests over the membership’s democratically-elected President. Their goal was to strip the President of all power, voice, and ability to run SEIU Local 1000 and return to the status quo.

Historically, labor unions, like Local 1000 hold elections and its members elect a President who runs the day-to-day operations. This is the basic foundational tenet of democracy.

But the current Board of Director’s anti-democratic, anti-union, cabal of insurrectionists have a different idea. The proposed policy file changes go on to define how their idea of a democratic union should function;

Under the conspirators’ plan ‘the Chair’ will assume all duties formally given to the member-elected SEIU Local 1000 President.

How many leaders operate in the back room? What kind of leader consistently shuts out the people they represent? Does a leader withhold information on what they are doing, what business they are voting on, and how they vote?

President Brown is fulfilling his promise of bringing transparency to SEIU Local 1000 by providing members with valuable information. He continues, along with many other representatives, to fight for all represented employees by enforcing the contract and representing them at the bargaining table.

The one thing President Brown cannot do is make you care. You have to want to be informed and, hopefully, be involved in how our union operates. This is how we create a new culture of excellence… together.