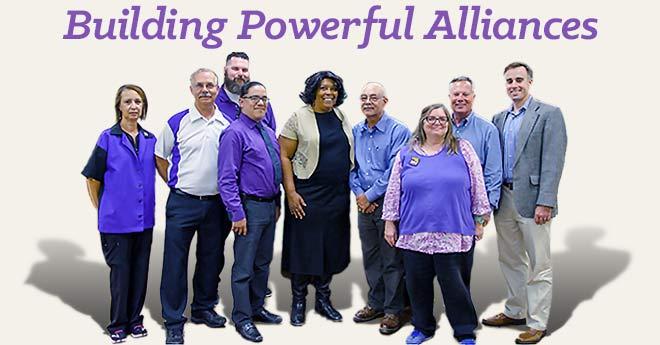 On October 23, Local 1000 President Yvonne R. Walker accepted an invitation from Central Coast members to tour the correctional facilities in Soledad, and the visit provided an opportunity to connect members from across the state with important struggles that are going on there. It also helped solidify alliances the union is making to honor our Purpose Statement’s directive to build better and more sustainable communities for all Californians.

President Walker began the day by touring the Correctional Training Facility (CTF), Department of State Hospitals (DSH) and Salinas Valley State Prison (SVSP). Her host was DLC 741 Chief Steward and Vice President Nick Mannion, who works as an LVN at SVSP. She then met with union leaders and representatives from both the Catholic Diocese of Monterey and the group Communities Organized for Relational Power in Action (COPA).

Walker’s meeting with the diocese was made possible by members who had met with Bishop Richard Garcia and Deacon Warren Hoy a month earlier about the distressing use of mandatory overtime as the state’s fallback staffing tool for nurses and nursing assistants at state facilities. Those members shared with the church leaders how, after working sixteen hours, they were often so sleepy that they drove off the road and how the back-to-back double shifts impacted their ability to administer medication. They explained how they couldn’t spend as much time with family or even attend church. The members expressed that the stress and tiredness would cause medical errors that would in turn jeopardize their licenses.

Walker, who has elevated the cause of ending the routine use of mandatory overtime to a top concern for the union, used her Soledad visit to have deep conversations with members about how they have suffered under the practice. She then secured commitments from the diocese and COPA to join the fight against mandatory overtime.

“Yvonne heard lots of stories about the impacts of working sixteen hour days because of mandated overtime,” says Mannion. “The icing on the cake was learning that Bishop Robert Garcia is committed to ending MOT and wants to join our union efforts to protect worker safety.”

For Walker, the trip solidified her belief that Local 1000 continues to find new ways to grow and build power by encouraging and incorporating the ideas of our members.

“Sharing COPA’s organizing tradition with experienced and emerging leadership of SEIU Local 1000 has allowed working families in our region to develop a voice like never before. We look forward to growing this partnership,” said COPA’s Tim McManus.