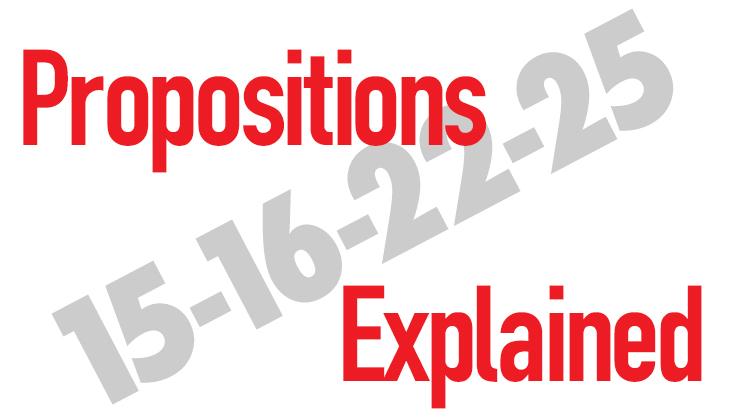 This year voters head to the polls ready to fight for social and economic justice for all Californians. Local 1000 members who have been a part of that fight now face another choice, as the state considers four major ballot measures that address the COVID-19 pandemic and the systemic failures it has highlighted this year.

The first measure, Prop 15, will help California recover from the pandemic crisis by reclaiming $12 billion each year in new funding for every school district in California, as well as for services like public health emergencies and homelessness. This measure will do so by closing an egregious loophole in our property tax system and ensuring our state’s biggest corporations pay property taxes on the fair market value of their property, while protecting homeowners, renters, small businesses, and agriculture. Currently, many major corporate properties, such as Disneyland, still pay taxes based on 1975 land value. This costs local schools and communities $50 million each year, while corporate profits continue to rise.

Prop 16 is an important measure that opens the door for public employers and universities to use affirmative action policies to pursue greater diversity. So far, 42 other states have taken gender, race, ethnicity, and national origin into account for college admissions and hiring in government and public agencies. The ban on affirmative action has resulted in over $820 million in losses every year for Minority- and Women-Owned Business Enterprise Program contracts with the State of California. Restoring affirmative action is the next step in building a more equitable and diverse future for California.

Another important economic issue for workers across California is Prop 22. For years, app-based “gig economy” companies have flagrantly violated California’s labor laws by refusing to recognize their workers as employees. This hurts all Californians, leading to falling wages, worse working conditions, and the mis-classification of workers as “contractors.” This systematic mistreatment of app-based workers has denied them medical coverage, unemployment insurance, and other benefits. When multi-billion-dollar companies treat their workers badly and break the law, workers across the state need to stand up to them, and when they try to rewrite the law in their favor, we have to stop them by voting NO on Prop 22.

Finally, as we work with the state to cut costs and find new savings, Prop 25 addresses a huge cost to the state that has gone unaddressed for far too long. California taxpayers spend approximately $5 million each and every day to detain people that can’t afford bail. Under the current system, people arrested for minor, non-violent offenses who can’t afford a bail bond must wait—sometimes weeks or months—for their court date. 6 out of 10 people in the U.S. are in jail awaiting trial, having never been formally sentenced. Prop 25 ends money bail, which is wasteful, unfair, and ineffective. The $2 billion for-profit bail bond industry lets the rich go free, regardless of their crime, while the poor sit in jail awaiting trial.  This is discriminatory and unsafe. Prop 25 creates a better system that makes decisions based on public safety instead of the ability to pay.