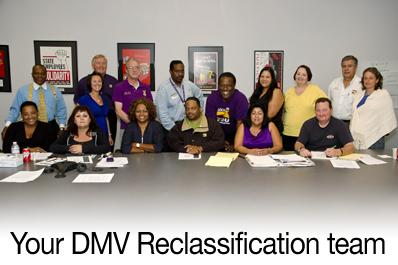 The Unit 1 DMV reclassification team along with the Unit 4 liaisonreclass team members, union staff, state negotiators and DMV management met in early March to discuss our new proposed job specifications for the Unit 1 Driver Safety Hearing Officers classification and to hear an update on the new Motor Vehicle Field Representative (MVFR) and Motor Vehicle Technician (MVT) specifications which had been previously presented by the reclass team to the state.
DMV indicated that after a short delay, they were almost finished with their review of the MVFR/MVT specs, and the state would begin their job specification review shortly.  We were told that we would receive an update on that process at our next table which was tentatively scheduled for the end of June, but due to the activity surrounding our side letter agreement – that meeting is being rescheduled.

Despite the delays in this process, DMV and the state have stated that the goal for completion of the reclassification process is spring of 2013, and we are on track to reach that goal.