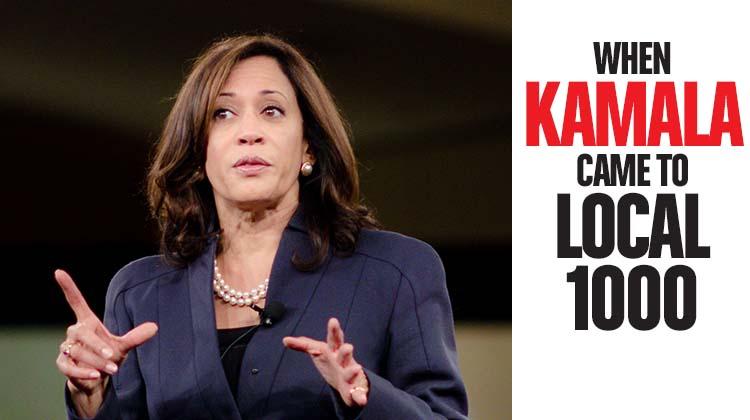 Kamala Harris’ ascension to the vice presidency is a milestone—the first woman, the first woman of color, and the first Asian to hold the office. And we lift her up as an exemplar of the future of a country that is growing more racially diverse.

Harris’ road to the White House had many milestones, and it included several stops at SEIU Local 1000, where she shared her vision of what leadership meant and what California could aspire to be.

In 2010, she spoke at one of SEIU’s One Voice Town Halls, where candidates vying for statewide office met with our members, seeking their political endorsement. Soon after, she was elected to the post of Attorney General, the first Black woman to hold the post.

The next year, as the leader of California’s Department of Justice, she worked with Local 1000 to mitigate layoffs at the Department of Justice caused by years of crushing budget deficits. Her efforts included a Town Hall hosted by Local 1000 President Yvonne R. Walker. During the live broadcast, they outlined the steps being taken to minimize the impact for affected DOJ employees.

In December 2013, Harris was a keynote speaker at our annual Leadership Development Conference, providing her perspective on Local 1000’s role as a leader for all Californians.

Three years later, Kamala Harris was elected to the U. S. Senate with the help and support of Local 1000 members. She was only the second Black woman to rise to that office.

And now, with a nation in transition, our top leadership includes a woman who has risen higher than any other elected official. As union members, as working families, as Californians, and as Americans, we are better because of her accomplishments and her commitments and proud to count her as a friend.