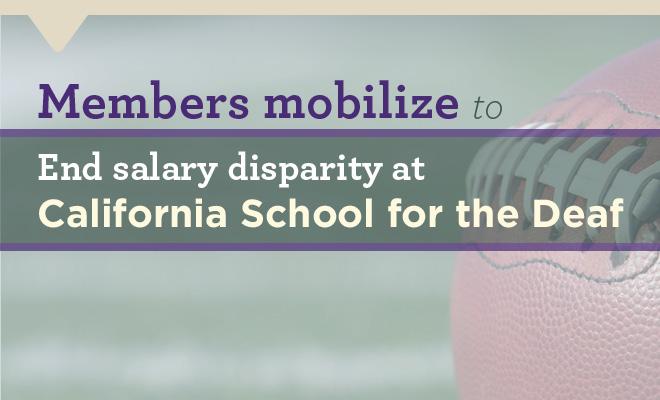 Local 1000 members at the California School for the Deaf (CSD) took action to protest unfair coaching salary schedules that have deaf coaches being paid less—sometimes as little as half—than the salaries of their hearing counterparts at other schools. During the CSD Fremont homecoming game against rivals CSD Riverside on October 17, members created an organized presence, setting up a booth and handing out “Support Our Coaches” stickers and fliers to call attention to the unequal pay.

The on-field contest between the two CSD schools provided the perfect setting to make the problem of unequal and unfair pay known to parents, teachers and the public.

“When you look at the hundreds of hours coaches work, it comes out to $1.50 per hour. That isn’t right.”
—Sulghi Hong, CSD steward

That the event was a football game was especially meaningful, as that is the coaching position where the disparity is most stark: $1,550 per season for CSD football coaches, $5,000 per season for nearby Fremont Unified School District football coaches. Both play a standard ten-game season, points out Sulghi Hong, a teacher and steward at the Fremont campus who also serves as a DBUR for DLC 742.

Hong also notes that FUSD high school teams play locally, with travel limited to about a 40-mile radius. Contrast that with CSD coaches who may, due to division rules, play teams 100 miles away as well as travel to play other state schools in places like Florida, Texas, Indiana and Maryland 3,000 miles away. Coaches are away from their families overnight and have to stay with their teams at all times during travel.

“When you look at the hundreds of hours coaches work, it comes out to $1.50 per hour,” says Hong. “That isn’t right.”

The CSD action comes amid a surge in full union membership at Fremont, now at 83 percent.

“Sulghi and the other stewards at the School for the Deaf are showing the energy and commitment that makes change happen,” says Yvonne R. Walker, Local 1000 President. “When we stand together as members, we create a power that can’t be ignored.”