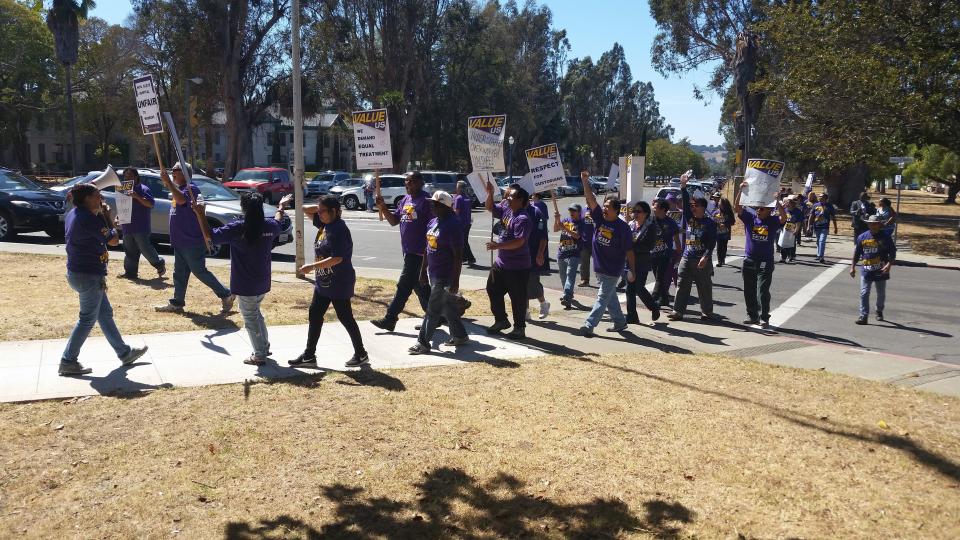 The movement for dignity and solidarity in Bargaining Unit 15 is growing at Napa State Hospital. A large worksite action organized by custodians there is calling public attention to unsafe conditions and forcing management to the table to address a variety of worker concerns.

There are several issues that prompted the action – all of which have created a general atmosphere of disrespect for workers, bullying, favoritism and incompetence on the part of management in the housekeeping department at Napa State Hospital. The issues are remarkably similar to those facing the custodians at Yountville Veterans Home, which is just ten miles up the road from Napa and where custodians have also been organizing for dignity.

Like Yountville, the last straw for workers came when management refused to implement post and bid as required by our contract. Several years ago, management stopped posting custodial positions and has been using favoritism and retaliation as a basis for assigning positions. There are also a number of issues involving lack of respect including requiring all custodians to be “escorted” by a supervisor to the clinic on grounds for their annual physical (no other classifications at NSH are escorted) and refusing to release paychecks before end of shift—even to those who are not working that day.

Our members quickly organized a public demonstration outside the facility that brought out the press and resulted in a write up in the Napa Valley Register. The action got results: Management is now meeting with workers to discuss the problem issues.

“We’re stronger together,” said Maria Patterson, Unit 15 Bargaining Chair. “We will be treated with dignity in the workplace when we stand together and fight.”