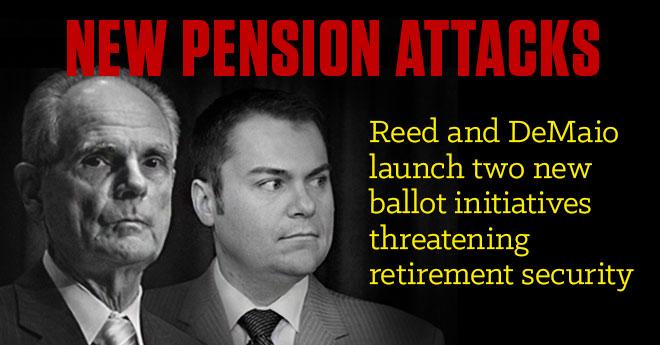 After a dangerous and deceptive pension initiative failed to gain support, right-wing extremists Chuck Reed and Carl DeMaio have come out with two new proposals that continue their efforts to degrade the hard-earned pension benefits of public employees.

While their new approach appears to dial back the threat to current workers, the new attacks are just as dangerous. Everyone who cares about the economic security of California as a large segment of our population moves toward retirement should take this multi-pronged attack very seriously.

The new proposals, which are currently named “Voter Empowerment Act of 2016” and “Government Pension Cap of 2016,” would both be perilous to public employees if passed.

The “Voter Empowerment Act” would eliminate defined benefit pensions for new employees in favor of risky, 401(k)-style defined contribution plans. It would limit employer contributions to one-half the cost of retirement benefits. Employers would not have to pay anything and are limited to paying no more than half. The act would prohibit benefit enhancements in existing plans and prohibit employers from paying the increased costs related to closing existing retirement plans. Death and disability plans would be imperiled because they are currently based on a defined benefit plan.

The “Government Pension Cap Act of 2016” would cap government employers’ contributions at 11 percent of base compensation, or 13 percent for public safety employees. More troubling, it would include Social Security, Medicare, retiree health care, defined contribution plans or other deferred compensation toward the eleven or thirteen percent cap.

These proposals would eliminate reciprocity; that means if a government employee changes employers, he or she would be treated like a new employee. For example, teachers changing school districts would lose their pensions.

It’s clear that the forces that want to cut public employee pensions will keep coming with attack after attack. But Local 1000 will meet every threat, joining our strength with other public employee unions to defend the retirement security that our members have fought for and been promised.