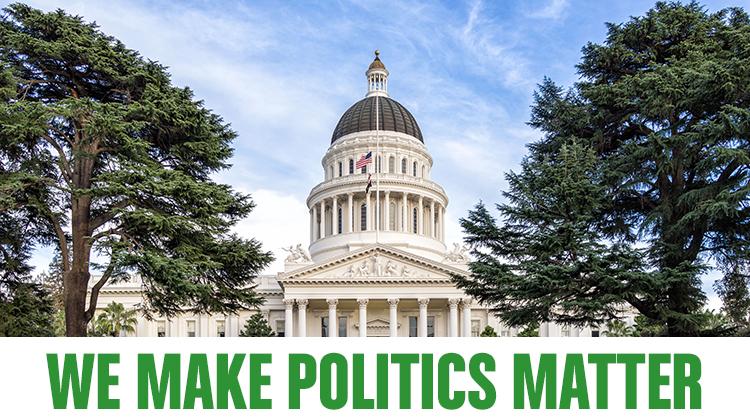 This election represented a watershed moment for our democracy, as voters determined the future of our nation and our state. Local 1000 members were at the forefront of that fight, organizing phone banks, texting voters, and volunteering their time to show that every vote truly matters and demand that every vote be counted in the race for President. Thanks to that hard work, we helped usher Joe Biden and Kamala Harris into the White House.

The 700,000 SEIU members in California joined millions of our brothers and sisters and working people across the country to ensure that the future of our democracy is one we all participate in.

SEIU California played a significant role nationally in the key swing state of Arizona, where the Union led the largest Spanish media program to Latino voters outside of the Biden campaign.  Our efforts reiterated that when people from underrepresented and historically oppressed groups vote, justice wins. And when working people come together and fight for all of us, we all win.

Here at home, our efforts focused on helping voters and essential workers turn out in record numbers, specifically working people in communities of color who don’t always vote.

SEIU California members scored multiple significant wins in the legislature, continuing our drive to ensure our elected leaders listen to, support, and champion working families and labor initiatives in California. Our victories include Dave Cortese in SD-15, Josh Newman in SD-29, Dave Min in SD-37, and Reggie Jones-Sawyer in AD 59.

For official up-to-date results, visit the secretary of state’s elections page at sos.ca.gov

Our values were also on the ballot in the form of multiple propositions that affect labor, our communities, and our members.

The results of our hard work paid off, as voters delivered a definitive win for racial justice by passing Proposition 17, which restores the right to vote to people convicted of felonies who are on parole. This, alongside the rejection of Proposition 20 (which would have made changes to criminal sentencing charges and prison release conditions), represents a strong step forward for fixing California’s broken justice system. Prior to this, California was behind other states that had already codified into law a citizen’s right to vote after they finish their prison term. This re-integration into society has immediate important impacts, not just on elections, but for safety in our communities, as a recent parole commission report found that parolees who have their voting rights restored are less likely to commit future crimes.

However, other results show how much more work there is to be done. Buoyed by $200M in spending by big businesses and their political agents, Proposition 22 passed, creating a grim precedent for worker protections in California. Additionally, the failure of Propositions 15 and 21 mean there is still a long way to go to fight for housing justice for all across the state.

Proposition 25, which presented Californians with a chance to reform the unjust and discriminatory money bail system and represents a crucial first step of many needed to bring greater fairness for Black and Brown people in our justice system, also did not pass. Regardless, we made significant inroads on all of our initiatives, and we remain undeterred.

As the national and local election results are finalized, SEIU members and “Fight for $15 and a Union” leaders across the country are standing strong with our allies. Working people’s issues are at the center of transforming our economy and democracy. This is clear from our win in Florida: despite going to Trump, 61% of voters said “Yes” to a statewide $15 minimum wage. But making real change takes time, and holding corporations and politicians accountable for decades of misdeeds isn’t going to happen overnight. We will continue to fight for what we know is right, because when we fight, we win!