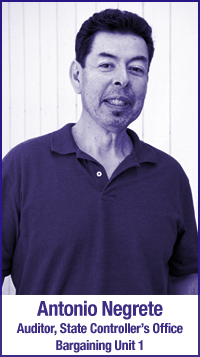 Unit 1 auditor: ‘Too much is at stake to stand still’

Even though it’s a hot day in August and the election is not until November, Antonio Negrete joined with dozens of Local 1000 members and staff to knock on doors and contact voters at home.

“It’s only August, but there’s too much at stake in this election for us to stand still right now,” said Negrete, an auditor with 25 years experience at the State Controller’s Office. “If Proposition 32 passes, we lose our ability to protect our benefits and wages from political manipulation.”
Negrete is part of a statewide effort to reach out to voters early and educate them that Proposition 32 is not what it seems. The initiative, which is largely funded by wealthy corporate donors and right-wing tycoons, masquerades as cam- paign reform. But as nonpartisan, good government groups including Common Cause and the League of Women Voters have pointed out, Proposition 32 is designed to give one side a political advantage by limiting the ability of labor unions to collect political donations from members.

“After working 25 years for elected officials, I know that my job is af- fected by the political process,” Negrete said. “As an auditor in Bargaining Unit 1, I know that I need to step up to protect my retire- ment security and other benefits we have worked so hard to earn.”

Local 1000 members will be making phone calls after work and knocking on doors on week- ends to tell voters the truth about Proposition 32. If you want to join, go to seiu1000.me/MjEjTA

“I’m working to stop Proposition 32 because I value our ability to protect our benefits through the political process,” said Dee Dee Munson, an Employment Development Department adjudicator. “If Prop. 32 passes, you will see big changes in future years. Everything we have fought for and gained will be taken away from us, and we will be powerless.”