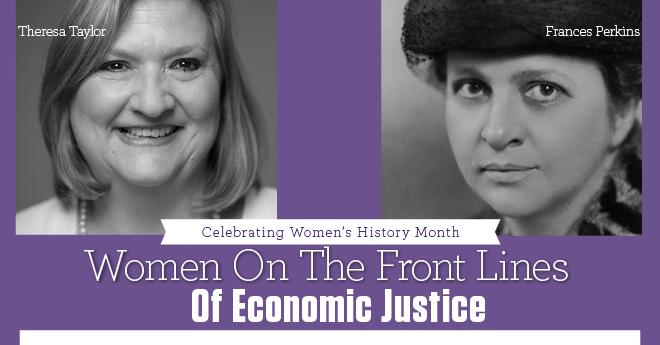 Frances Perkins, (April 10, 1880- May 14, 1965) became the first woman in the nation to serve in a Presidential cabinet, being named Franklin D. Roosevelt’s Secretary of Labor in 1933 and serving until 1945. She was the principal architect of key New Deal programs including Social Security, unemployment insurance, laws regulating child labor, a federal minimum wage, and the 40-hour workweek.

Perkins steeled herself against the sexism she endured, holding strong to her conviction that economic justice is integral to a democracy, saying: “The people are what matter to government, and a government should aim to give all the people under its jurisdiction the best possible life.”

Perkins’ trailblazing leadership and her commitment to economic justice live on in the women leaders of Local 1000 and their work to forge a better life for working families.

Vice President/Secretary-Treasurer Theresa Taylor, who also serves on the CalPERS Board of Administration, says Perkins’ steadfast resolve in creating a social safety net continues to inspire her today as she advocates for secure retirement as a basic right for all Californians.

“Frances Perkins and the New Deal brought working people into the middle class,” says Taylor. “We need to continue her fight to make sustainable economic security for all a reality.”