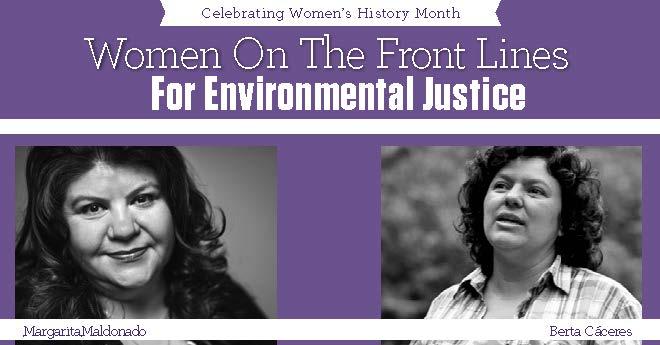 Berta Cáceres (March 4, 1971-March 3, 2016) was a Honduran environmental activist and leader of the indigenous Lenca people there. She led a decade long internationally-waged battle to stop a dam being built on the Gualcarque River, a body of water which is sacred to the Lenca.

In 2015, she was awarded the Goldman Environmental Prize for her work, but still she was stalked, received repeated rape and death threats and saw several of her supporters killed. Those suspected of the murders and harassment went free while Cáceres was forced into hiding. For the past few years, she almost never spoke on the phone, was often on the move, and never travelled alone. In response to why she didn’t back down in the face of unspeakable terror, Cáceres said:

“We must undertake the struggle in all parts of the world, wherever we may be, because we have no other spare or replacement planet. We have only this one, and we have to take action.”

Sadly, on March 3 of this year, armed intruders broke into Cáceres’ home and murdered her.

Cáceres’ incredible sacrifice illustrates how high the stakes are globally in the struggle for environmental justice. At Local 1000, we have added the words “environmental justice” to our Purpose Statement to acknowledge that economic and social justice are inextricably intertwined with the right for all to live in a healthy and sustainable environment. Our

Environmental Committee is committed to reducing possible damage caused by the work of the state while continually working to find ways to improve the environment.

For Maldonado, the work of the union is inextricably tied to protecting the natural world—and making sure marginalized communities are not targeted for pollution and resource depletion.

“Berta taught us that living in harmony with our world is a human right,” says Maldonado. “We can all honor our sister by reaffirming our commitment to environmental justice.”