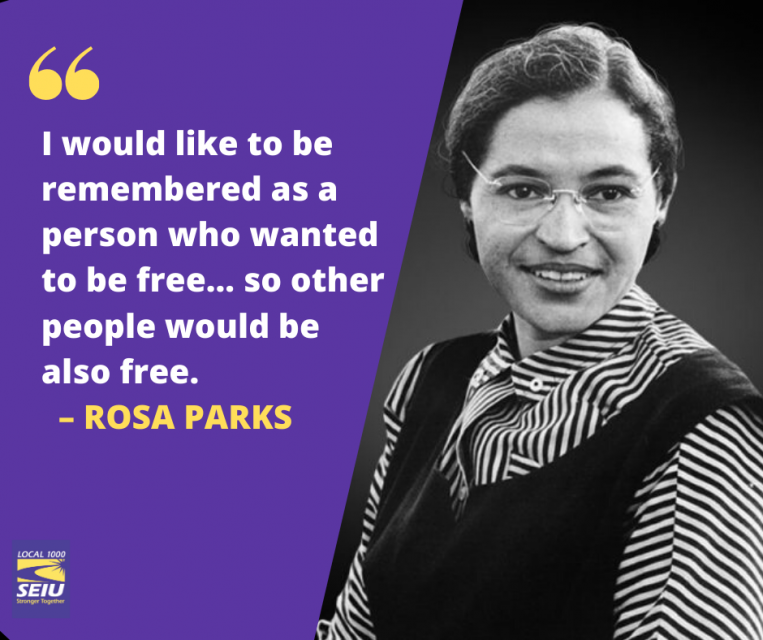 The work of Rosa Parks is a reminder that people’s individual actions can lead to extraordinary change. And that as Union activists, we too can forge change as did Ms. Parks.

On December 1, 1955, we all know that Rosa Parks refused to give up her seat on a Montgomery, Alabama, public bus, when asked to do so for a white man.  This single action of civil disobedience kicked off the Montgomery Bus Boycott that lasted for over a year.

She was an activist with the NAACP in Montgomery before this action and had several run-ins with the bus drivers; nor was she the first person to fight the bus segregation. She, however, was believed to be the best candidate to see a court fight through, based on her reputation and standing within the Black Community at the time.

Before the Montgomery Bus Boycott:

Before Ms. Parks was arrested for resisting segregation, she was a sexual assault investigator for the NAACP.  She joined the NAACP in 1943.  In her first active years within the organization, she focused on criminal justice work.   One part of this was protecting black men from false allegations of rape and lynching; the other part was ensuring that black people who had been sexually assaulted by whites got justice and their day in court.  This was particularly important to her since, in 1931, a white neighbor had attempted to assault her.

After her Civil Disobedience:

What gets lost in our history and remembrance of Rosa Parks are the hardships she and her husband endured after her arrest for her refusal to give up her seat on the bus. After the boycott of 1955-1956, Ms. Parks had issues at work with other blacks who ostracized her for speaking out.  She was let go as a seamstress for Montgomery Fair Department Stores.  Her husband, Raymond, quit his job after a rule was passed at his work disallowing people to talk about her. Ms. Parks suffered for a good 10 years after her arrest, unable to provide for herself.