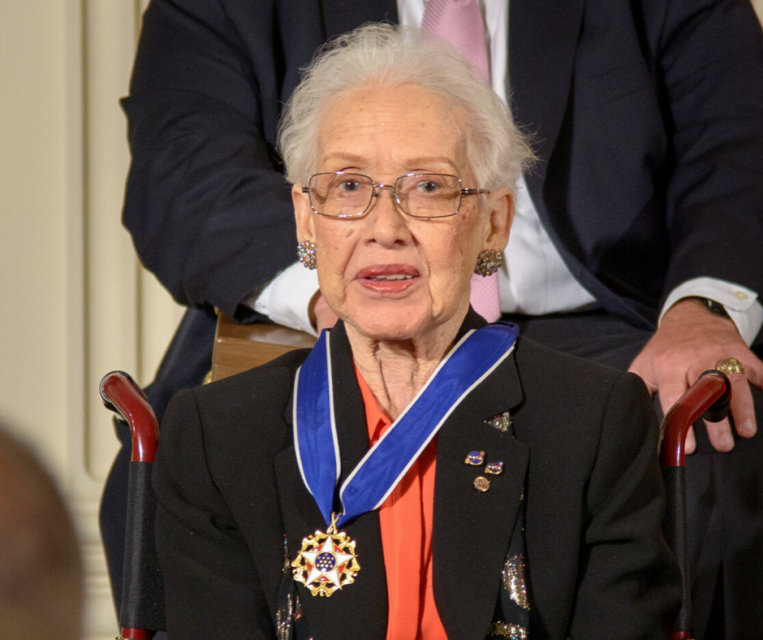 Katherine Coleman Goble Johnson is an American mathematician whose calculations of orbital mechanics as a NASA employee were critical to the success of the first and subsequent U.S. crewed spaceflights.

In 1953, she joined Langley Research Center (LaRC) as a research mathematician for the National Advisory Committee for Aeronautics (NACA). Johnson was assigned to the all-male flight research division. Her knowledge made her invaluable to her superiors, and her assertiveness won her a spot in previously all-male meetings. NACA became the National Aeronautics and Space Administration (NASA) in 1958. Upon leaving The Flight Mechanics Branch, Johnson went on to join the Spacecraft Controls Branch where she calculated the flight trajectory for Alan Shepard, the first American to go into space in 1959. Johnson also verified the mathematics behind John Glenn’s orbit around the Earth in 1962 and calculated the flight trajectory for Apollo 11’s flight to the moon in 1969. She retired from NASA in 1986.

Her calculations were also essential to the beginning of the Space Shuttle program, and she worked on plans for a mission to Mars.  In 2015, President Barack Obama awarded Johnson the Presidential Medal of Freedom.  She was portrayed by Taraji P. Henson as a lead character in the 2016 film Hidden Figures.  In 2019, Johnson was awarded the Congressional Gold Medal.