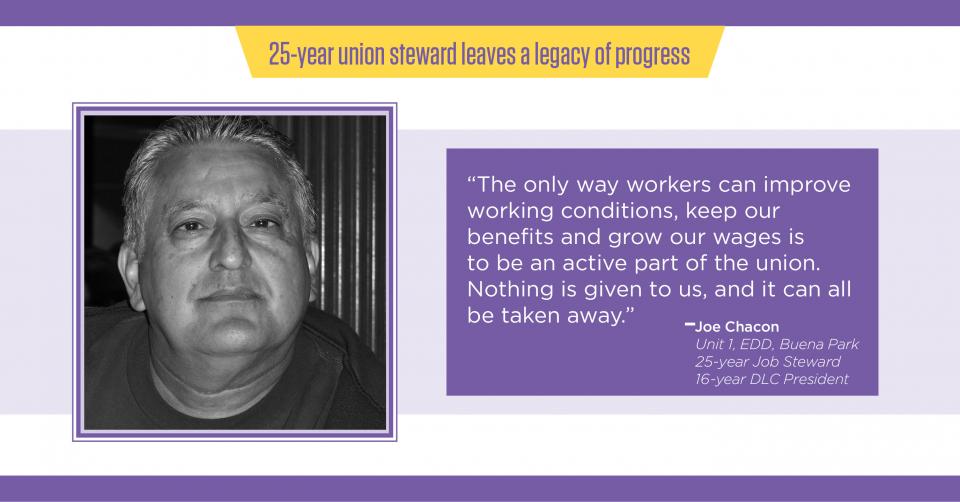 With his retirement from state service just a month away, Joe Chacon looks back with pride on how he’s helped his union grow strong and what he’s accomplished for his fellow state workers.

Working as an Employment Program Representative for nearly 30 years, Joe spent his career building a prosperous California by providing assistance to employers, workers and job seekers. While he’s proud of those vital services he delivered, he’s equally proud of his work as a union member, activist and leader.

“Over many battles, I did my part to make society better for all people and particularly for working families,” he said.

When asked to identify the high points in his union career, he pointed to his work to help reclassify EDD employees some 20 years ago, which yielded better job specifications and pay increases. He was also part of the evolution of our union from an autocratic employees’ association into a member-led union, Local 1000, in the early 2000s.

Community was important too: Joe was the chair of our Latino/ Latina committee and participated in the statewide committee that helped to create California’s Cesar Chavez Day holiday.

We congratulate Joe Chacon for his tireless efforts in helping his union and his fellow workers make progress in securing social, economic and environmental justice for all Californians.

Have a voice in the direction of your union. Click here to become a member today!