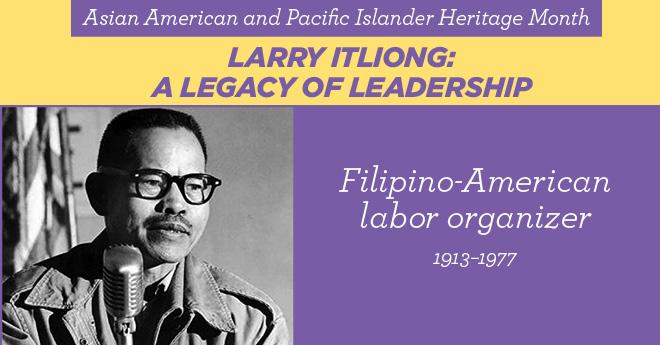 As we celebrate Asian American and Pacific Islander Heritage Month, we honor Larry Itliong, a highly influential leader whose pivotal role in the farm labor movement left a long-lasting legacy.

Larry Itliong, also known as “Seven Fingers,” was a Filipino-American labor organizer whose story is not as well known as others but is just as important to our history.

It’s been said that Cesar Chavez inspired the world but that Larry Itliong inspired Cesar Chavez. In an era known for civil rights movements, Itliong fought for better working conditions in a country thousands of miles from his homeland of the Philippines.

He came to the U.S. in 1929 when he was 15, never having slept in a bed or lived in a home with electricity. He was a natural activist and worked as a laborer and a farmhand in several states.

Itliong first joined striking lettuce workers in Washington State. Later, he fished in Alaska and organized the cannery workers there. It was also in Alaska that he lost three fingers in an accident in a cannery, earning him the nickname “Seven Fingers.”

Itliong went on to organize Filipino farm workers as they followed the seasonal harvests of grapes, raisins, brussel sprouts and other crops across Central California.

In 1965, Itliong lead a grape strike in Delano that set the stage for the boycott that would lead Chavez and thousands of farmworker families to create the nation’s pioneering agricultural labor union, the United Farm Workers.

The historic strike vote led by Itliong and the Agricultural Workers Organizing Committee took place on Sept. 8 1965 and was soon joined by the Chavez-led National Farm Workers Association. Five years later, they formed the powerful United Farm Workers and forever changed the face of agricultural labor in California.

Itliong spent his life standing up for his belief that “everyone has equal rights and justice, but you have to make that come about.” He died on Feb. 8, 1977, leaving a legacy of activism that inspires us all.