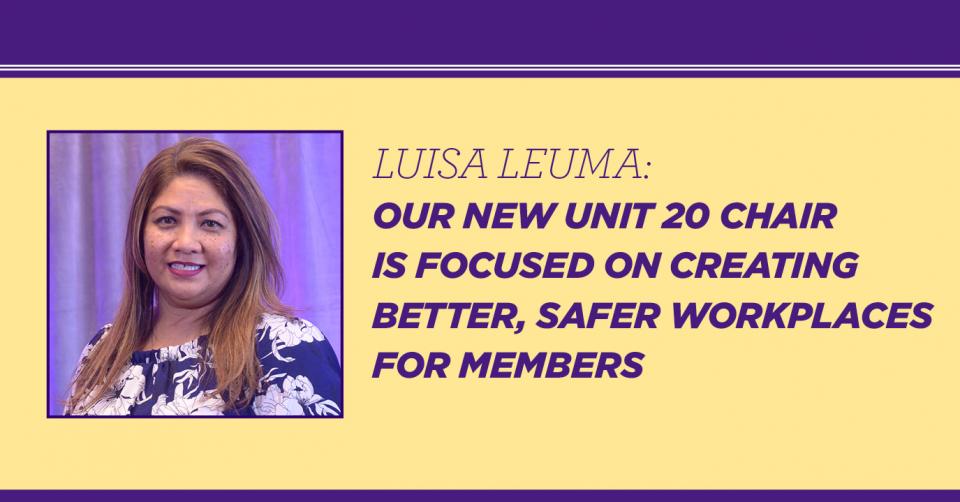 Developing leaders across the state is a union value and a priority for Local 1000. For Luisa Leuma, her recent election as the Chair of Bargaining Unit 20 is the next step in her leadership journey.

Working as a Licensed Vocational Nurse (LVN) at Avenal State Prison, Luisa became a union steward in 2010. In 2013, she was elected as a Unit 20 District Bargaining Unit Representative (DBUR) and this year, was voted in as the Chair of Unit 20 and will lead her unit’s efforts to negotiate a great contract next year.

Luisa’s been involved as a union activist in many Local 1000 campaigns, including engaging Central Valley and Coastal members to build power in 2016 bargaining, organizing worksite actions and Town Halls, and aided our efforts to ratify our contract.

Working as an LVN in our correctional system, she sees first-hand the potentially dangerous effects of the mandatory overtime practices used as a staffing tool for medical professionals in our prisons. She worked on the #StopMOT campaign and, by engaging members to take action, helped win contract language that reduced and will ultimately eliminate a policy that endangers our nurses, their patients and the community at large.

Luisa Leuma’s leadership journey began because she wanted to “be a voice for those who wouldn’t or couldn’t speak up for themselves.” She believes that it’s more important than ever for state workers to join their union and get involved. “We all need to come together and stay in the fight,” she says.

Join the fight for your wages, benefits, working conditions and pensions, click here to become a member today.