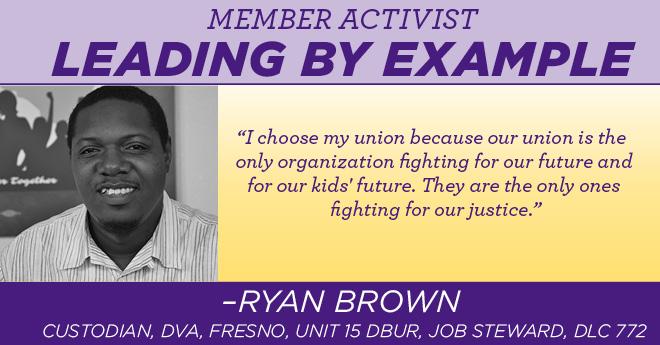 Ryan Brown began his state service eight years ago as a Unit 15 Custodian in San Quentin State Prison and has been intrigued about the power our union brought to its members ever since. He remembers engaging in conversations with organizers and learning more about Local 1000. It was three years later, after a transfer to Fresno as a Custodian at the Department of Veterans Affairs, when he began his leadership with our union.

Brown chose to become a steward in 2017 after he realized he had a voice to fight for social, economic and environmental justice at his worksite and in his community. He was appointed to be the Unit 15 District Bargaining Unit Representative (DBUR) for District Labor Council (DLC) 772.

Leading by example is something Brown does in each aspect of his life, work and community.

He is a member organizer on the frontlines educating co workers about the attack on unions from the so-called Freedom Foundation. He has been appointed to the Custodian Task Force and Local 1000’s Sustainable Career and Upward Mobility Task Force, all while setting time aside to focus on his son’s Pop Warner football team as a coach and vice president of the league.

“It’s important to use your voice to create the change that you want to see,” Brown said. “Nothing is ever given to you. You can’t just expect other members to go out there and do everything for you. If you’re willing to talk the talk, you got to walk the walk.”

Brown is currently working on developing other members and building leadership in the Central Valley.