Member Chooses Union Power to Fight for Our Communities 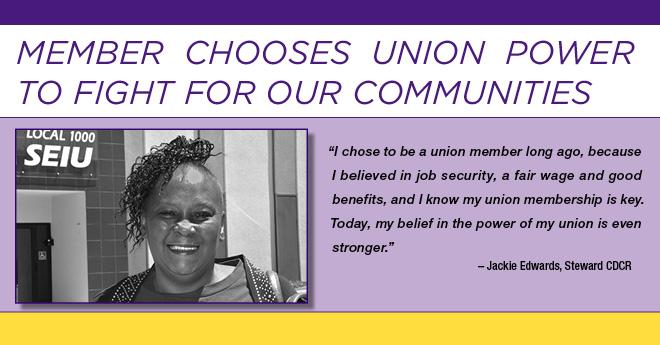 Jackie Edwards learned the importance of political action at an early age. Her father, a union worker, was a political activist who often took his daughter along as he attended phone banks and knocked on doors to talk to others about issues that impacted our communities.

“My dad taught me the value of a union job and the importance of electing labor-friendly candidates,” said Edwards. “When you want something to happen, you go talk to people.”

She’s been a state worker for 33 years, a union member and steward for the entire time. She works in the CDCR Department of Adult Parole Operations in Rancho Cucamonga. But her passion is having conversations with her fellow members, friends and family in the community. Edwards, a Local 1000 Member Political Organizer, has been spearheading our

Resistance phone banking efforts this year in her area, and regularly brings 30-40 coworkers to evening sessions to fight back against lawmakers’ efforts to “strip us of our hard-earned bargaining rights and diminish the ability to provide for our families,” she said.

“I chose to be a union member long ago, because I believed in job security, a fair wage and good benefits, and I know my union membership is key.” Edwards said. “Today, my belief in the power of my union is even stronger.”