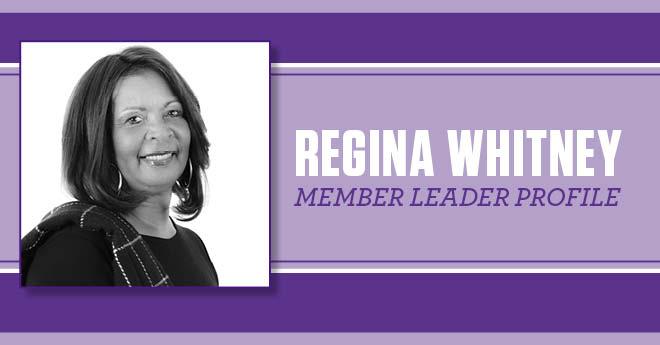 For more than 17 years, Regina Whitney has been an activist and a leader in our union. As a job steward since 1999 and as President of District Labor Council 743, she’s seen many campaigns and many changes. But her proudest moments come when she develops and encourages new leaders.

“Many people don’t see themselves as leaders, just like I didn’t see myself as a leader so many years ago,” said Whitney. “If you have passion, enthusiasm and care about your coworkers, you can be a leader, too.”

Whitney first became active in our union by becoming a job steward. Working in San Francisco at the Department of Justice as a Senior Typist, Legal, she learned that there was, as she said, “no voice in the department.” So she stepped up for steward training and encouraged three of her colleagues to become job stewards as well.

Stepping into that leadership role paid dividends later when the Typists organized to become Legal Secretaries. It was during that campaign when Whitney met another emerging Local 1000 leader: President Yvonne R. Walker, who was working in the same DOJ position in San Diego.

“I’m proud of my Union Sister Regina Whitney,” Walker said. “She’s made a tremendous contribution to the history and accomplishments of our union through the leadership she’s provided.”

One of Regina Whitney’s guiding principles in leadership is this: “Ability is what you’re capable of. Motivation determines what you do. Attitude determines how well you do it.”