Shaping the Future of the Central Valley 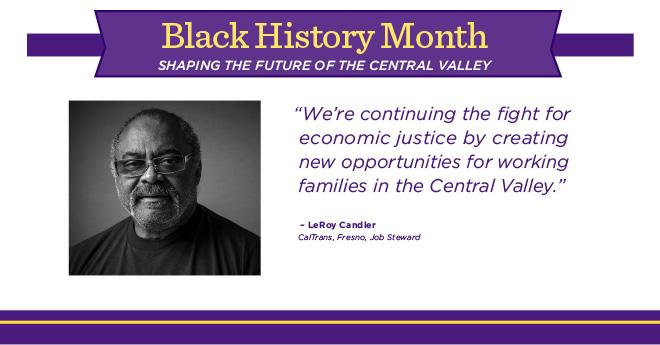 We celebrate Black History Month as an opportunity to honor the contributions of Black Americans who have done so much to shape the ongoing battle for social, economic and racial justice. Many of those who have accomplished so much serve as inspiration for today’s leaders. One such leader in our union is LeRoy Candler.

Candler, an 24-year state veteran who works at CalTrans as a Transportation Engineer Technician in Fresno, is a Job Steward and a member of the Unit 11 bargaining team. Following the Local 1000 Purpose Statement, he’s a long-time fighter for working families and the community at large through his volunteer work.

Through his work in VOICE, (Voice of Including Community Equitably), he’s worked with a coalition of government, non-profit groups and numerous churches to improve training and job opportunities for residents of Fresno’s poorest areas.

“We believe public money should be reinvested in the community,” Candler said. “We’re working to help some of the most disadvantaged people in the area to gain skills that lead to good jobs and bright futures.”

As the president of the Fresno branch of NAACP, LeRoy leads a group dedicated to ensure the political, educational, social and economic equality of rights to all persons and to eliminate race-based discrimination.

LeRoy Candler finds personal inspiration from the accomplishments of Supreme Court Justice Thurgood Marshall, the nation’s first African-American justice. Marshall was a champion of individual rights and freedoms, and spent his life fighting for social justice and equality.