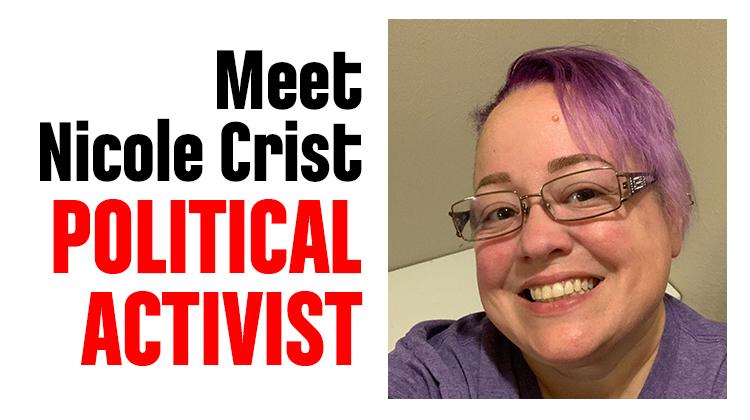 Our latest Text-a-thon with the Purple Text program sent out over 760,000 text messages in just two days. Leading the way was Nicole Crist, a Local 1000 Steward, who sent out over 118,000 messages personally during the month.

Nicole’s work with the Purple Text campaign is motivated by a lifelong passion for political engagement. “I’ve always been drawn to politics, even at a young age — it’s something that spoke to me,” she said. “I never wanted to go into it as a profession. It was more about using my own personal knowledge to have healthy debates with people, especially with those on the opposite side as me.”

This desire to be politically engaged encouraged her to get more involved in the issues that affect all members. “At the union summit, there were a lot of different things going on, and at first, I felt that the Purple Text campaign was a game,” Nicole said. “It was competitive, and I’m a competitive person by nature. The technological part is my wheelhouse and adding in politics made this the perfect realm for me to be in.”

That competitive spirit, combined with the goals she set for herself, led her to become the top texter in the entire campaign.  “It started out as a fun thing that I was checking out, getting positive and negative feedback, but then I started asking myself if I could reach this goal,” she said. “I ended up reaching out to almost 90,000 people, which I felt was an integral part of delivering important political information to people.”

Nicole’s personal motivation for political involvement and her work as an SEIU Local 1000 Steward is driven by her goals to educate members on the everyday issues that impact them. “Our livelihood depends on it,” she said. “Members need to understand that the more they engage in their union, the more they can understand how politics work, the more they can use that information to choose who best represents them and their interests as union members. From representatives and assembly members all the way up to the president, all have an impact on us as union members.” This perspective keeps her engaged with a variety of campaigns, trying to maximize her impact and outreach to as many people as possible. “I am doing everything I can to educate as many people as possible so that when they go to the polls they are making a sound decision based on the educational information they have.”

Looking at the upcoming months, Nicole’s plans have expanded as well. “I will be texting for the Reno campaign and working to get information out for the Biden/Harris campaign, concentrating on Nevada first,” she said. “Right now I am an enumerator for the census as well, which helps with the representation of different areas and funding for programs. It has been a great learning experience where I have been able to engage with different people before the November election, with the potential for massive change.”