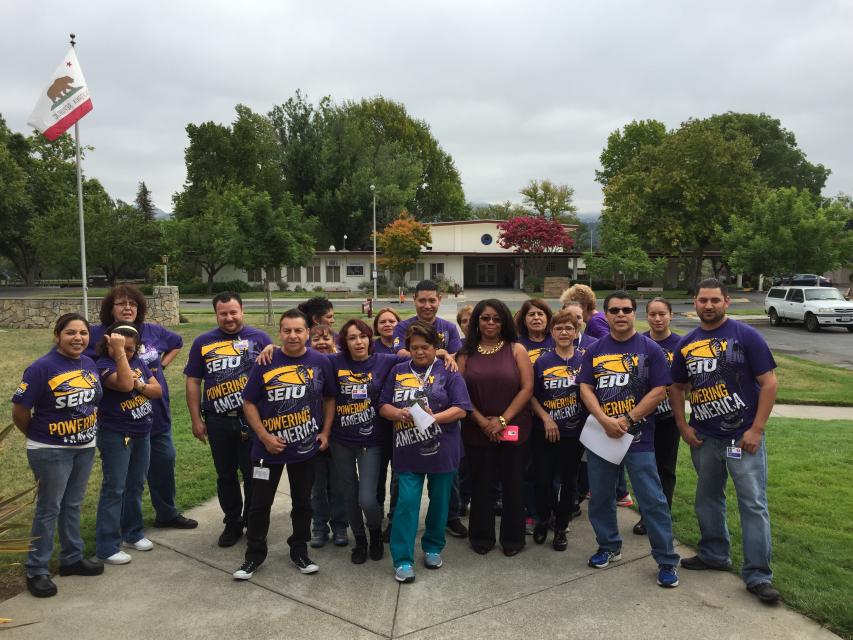 Organizing by our members at the Yountville Veteran’s Home is changing a culture of disrespect and abuse there and sending a message to other worksites in Bargaining Unit 15 that solidarity works and that we are always stronger together.

The members are custodians who have endured bullying at the hands of the housekeeping supervisor that includes berating staff in private and in public, using favoritism, punitively changing or doubling work assignments and using a “white glove” test to grade performance. And, in a clear and disturbing violation of our members’ rights, the supervisor consistently singled out for harassment members who were seen talking to Local 1000 staff or member leaders.

Our members decided it was time to push back. After an initial Joint Labor Management Committee (JLMC) meeting where management rejected outright Local 1000’s demand for a walk-up post-and-bid process, the Yountville custodians organized an action for the following JLMC on August 20. They marched on that meeting, bursting into the room and presenting all parties with copies of a petition demanding a walk-up post-and-bid. Additionally, members and Local 1000 representatives served notice to the abusive boss that, should he harass, berate or retaliate against one more member, we would organize against him personally.

The action made a huge impression; the members won both the walk-up post-and-bid and a reprieve from the housekeeping supervisor’s bullying. And our Yountville members’ chants of “Yes we can” and “Si se puede” are ringing out all over Unit 15: On September 2, custodians at Napa State Hospital decided to hold their own march, demanding a fair post-and-bid process for themselves—and to be treated with dignity.

“Members are standing up for each other now,” said Maria Patterson, chair of Bargaining Unit 15, of the unity of the organized custodians. “They don’t feel disconnected anymore.”