The Fight for Economic Justice

Local 1000 is committed to building a California with vibrant, sustainable communities and a healthy economy where all working families earn enough to enjoy a secure, meaningful life.

Unfortunately, California–like the rest of the country–is facing the worst wealth gap since 1928: The state is home to more billionaires than any other and yet 22 percent of Californians live in poverty. Seven out of 10 new jobs being created pay less than $15 an hour, making it impossible for workers to pay for basic necessities like rent and groceries, much less move upward into the ever-shrinking middle class. This is the segment of our population that are often referred to as the “working poor.”

Minimum Wage Affects All of Us

The minimum wage was created to be a hedge against impoverished workers, but the minimum wage is so out of sync with increases in the cost of living that workers who are paid the federal minimum wage make roughly 25 percent less than their counterparts 45 years ago after adjusting for inflation.

Fast-Food Workers Are Not Alone

But let’s not fool ourselves: The low-wage workers who have joined the Fight for $15 and a union are not limited to just the fast-food industry. Airport workers, healthcare workers and adjunct college professors are also joining the fight.

Low-wage work is hard and should be rewarded with dignity and fair compensation. Given that corporate America has proven over the last 30 years it is not inclined to pay a fair wage on its own, low-wage workers are also fighting for the right to organize in the workplace without fear of retaliation or retribution.

On April 14th, Local 1000 members statewide are gathering to mark the Fight For $15’s momentous first step and continue the fight for economic justice.

We will be out in full force, marching for our contract and all working families, because a great contract begins with a living wage!

Last week, Sacramento’s Income Inequality Task Force recommended an increase in the city’s minimum wage to $12.50 an hour by 2020. The recommendation will now go before the City Council for review and public comment before a final decision is reached.

“We have raised the debate about income inequality and will continue the fight for fair wages throughout California so that no one who works full time lives in poverty,” said Yvonne R. Walker, Local 1000 president.

Scores of Local 1000 members were joined by community activists from across the Sacramento region August 25 for a town hall addressing the growing wealth disparity in our economy and what working people can do to stand up for each other.

As the possibility for narrowing the income gap comes closer to reality for low wage workers in Sacramento, Local 1000 members are pushing to keep the needs of the working families top-of-mind for the city’s decision makers. At the third meeting of Sacramento’s Income Inequality Task Force on August 12, our members took their turn at the public comment podium to give voice to the real experiences of working Californians—and their community partners—who struggle to live on minimum wage.

Fight for $15 Day of Action Recap 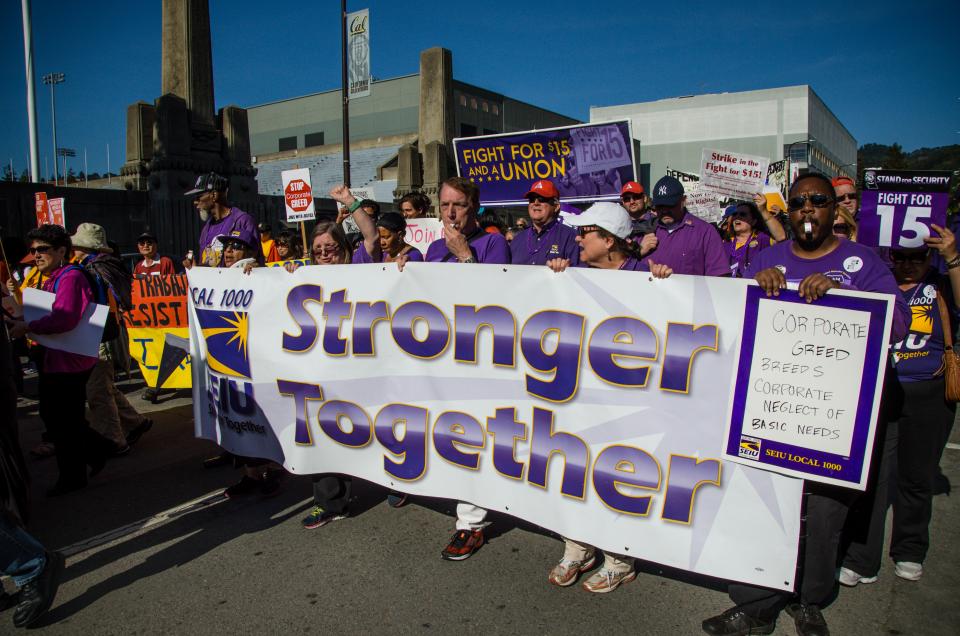 Local 1000 members joined thousands of low-wage workers and their supporters in rallies and marches across California on April 15 to mark the Fight for $15 and a Union National Day of Action.

“Let there be no mistake.In California, we will have $15 and a union. Local 1000 will be in the street for as long as it takes until we get what we need for working people.”
—Yvonne R. Walker, Local 1000 President

On Wednesday, thousands of people are joining fast-food workers, retail employees, child care workers, home care providers, airport workers and adjunct professors in rallies up and down the state and in more than 60 cities across the nation to demand fair pay for hard work: $15 and a Union.

“No one working full-time should have to live in poverty,” said Yvonne R. Walker, Local 1000 president. “We stand with these workers to ensure their prosperity and their ability to provide a dignified living for their families.”