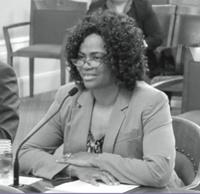 Member Profile: Shelia Byars
A Local 1000 activist for more than 15 years, Shelia Byars is stepping up once again and volunteering for campaigns that go beyond the worksite–working toward a better life for all Californians.
She’s applying the grassroots organizing skills she’s learned as an engaged member and applying them to the fight against income inequality and Raising California Together–a campaign that raises awareness and advocates for more early childcare options for members of the community that cannot otherwise afford it. She strongly believes that, “We are in a fight for our future and the future of our children, grandchildren and ourselves. We have a duty to strengthen the middle class and secure a living wage for all. Nothing can just be about us and our interests.”
This Bargaining Unit 1 member leader has been in state service for over 18 years and currently works at the Department of Motor Vehicle (DMV) Driver Safety Office in Stockton. Over the past 15 years, Shelia has served her fellow members as a DLC President, Chief Steward, DLC Secretary, District Bargaining Unit Representative and Sergeant at Arms.
She became involved in the Union when a Local 1000 staff member saw her potential and invited her to a steward training. “I wasn’t even aware of a steward’s role or how they help protect state workers, but I was taught by my mother that if you see something wrong with a situation–don’t just talk about it, fix it,” Byars said. “That meeting was my turning point because the Local gave me the tools I needed to set goals, foster teamwork and network with our members. The first thing I did was organize my worksite at the time to 100 percent membership by communicating Local 1000’s values and benefits.”
Grassroots organizing and political power produce DMV reclassification and compensation victory
In July of 2013, the Local 1000 DMV Reclassification Team reached an agreement with the state updating job specifications for more than 4,000 employees to better reflect the work they perform, and providing pay increases ranging from 1.5 per cent to 7.5 per cent. Throughout that battle, Shelia grew as a member leader and became a DMV campaign champion who stood up and fought for members at the bargaining table.
“The DMV campaign was successful because we involved our members in every step of the process– constant two-way communication, surveys, actions, testimony at the bargaining table–and the members trusted us because we stayed honest with them,” Byars recalls.
Once the agreement was reached with the DMV, it needed to be ushered through the legislative process and made into law. “I will never forget the name of that bill–SB 102,” she said. “It is so important for Local 1000 members to be involved politically, because if we didn’t help elect the right governor or legislators, the reclassification effort would still be a battle.”