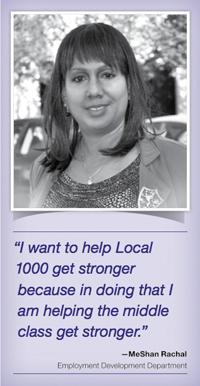 MeShan Rachal brings a history of organizing to Local 1000
Even before she began working for the state, MeShan Rachal was always an activist, but after seeing the power of her union in action, she stepped up for her fellow workers and the middle class in many ways.
Rachal became a Local 1000 activist after a complicated bureaucratic snafu caused her to be underpaid for a week every month. She pressed her case to her supervisors and to the Department of Personnel Administration. When that failed, she sought contract enforcement help from her union.
“As soon as we won my case, I signed up for steward training. I realized that my union – really my coworkers – needed me to step up for them,” Rachal said. “I want to help my union get stronger because in doing that I am helping the middle class get stronger.”
“I like to get involved to improve things that are going on around me, whether it’s in my community, my job or my kids’ schools,” said Rachal, an employment program representative at the Employment Development Department (EDD) inSacramento. “I don’t enjoy fighting, but I believe in fighting for what is right.”
Rachal is a New Orleans native who grew up in Berkeley and previously worked at UPS, where she served 10 years as a steward with the International Brotherhood of Teamsters.
In 2009, she began working as a temp at the Franchise Tax Board, then transferred to EDD, commuting from Sacramento to Oakland for more than a year.
“It was a grind – I was leaving home at 4 a.m. and getting back at 8 p.m.,” said Rachal, a single mother, whose children were in high school at the time. “I didn’t have time for my family or anything.”
Since becoming a steward, Rachal has been active in every major Local 1000 campaign of the past two years, organizing a phone bank of EDD workers in the 2012 elections and walking precincts for President Obama in Reno. Earlier this year, she organized coworkers in support of a new contract, and she testified before the Legislature on behalf of a bill to strengthen the rights of workers facing termination.
More recently, she has been recruiting new stewards at EDD offices throughout Northern California. “The more stewards we have, the stronger we are and the better the workers are treated. It’s true everywhere I have worked,” she said.