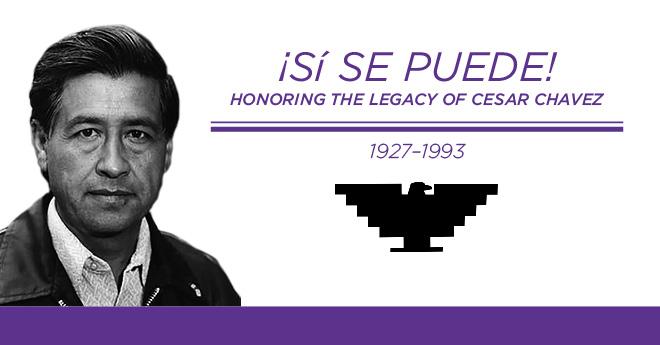 On March 31, we honor the heroic and pioneering achievements of Cesar Chavez, the labor leader and civil rights activist who changed the landscape for farm workers by securing raises and improving working conditions in the fields of California, Texas, Arizona and Florida.

Working with another prominent labor pioneer, Dolores Huerta, he co-founded the National Farm Workers Association in 1962, which later became the United Farm Workers (UFW). They won the first collective bargaining agreements for farm workers, including the first-ever health and pension plan for farm laborers.

Building on his early experiences as a migrant farm worker, he used non-violent tactics and a public campaign to make the farm workers’ struggle of low wages and harsh working conditions a moral cause, which gained nationwide support.

As an international leader, Chavez built power by partnering with a range of religious, community and labor organizations, and by doing so, changed the lives of Black, Filipino and Latino families in the U. S. and internationally.

Less known is Chavez’ Navy service during WWII. For being what the Navy Secretary called an “American hero,” the USNS Cesar Chavez  was the first ship named after a Latino.

Chavez’ values and practices continue to be important guiding principles to us today. Chavez died in 1993, leaving a legacy of social and economic justice for all of us.