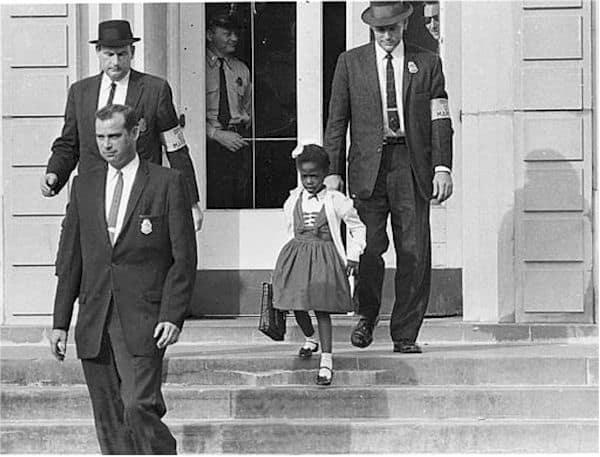 Ruby Bridges was the first African-American child to attend an all-white public elementary school in the American South.

At age six, she was assigned to a previously segregated student body at William Frantz Elementary in New Orleans. On the first day, she was escorted to class through a violent mob by her mother and U. S. Marshals

That day, nearly all the white children were kept home by their parents. Only one teacher, Barbara Henry, agreed to teach Ruby. Because other parents pulled their children from the school, Ruby was Ms. Henry’s only student for the entire year. Due to continuing threats, Ruby spent the entire day in the classroom, only ate food from home and was escorted to the restroom by the Marshals.

Her family suffered as well. Her father lost his job, her grandparents were forced off the land they had sharecropped for over 25 years, and the grocery store where the family shopped banned them from entering.

Over time the community, both black and white, began to show support in a variety of ways. Many families sent their children back to the school, and the protests and civil disturbances diminished. Ruby completed grade school and graduated from an integrated high school.

In 1999, she formed the Ruby Bridges Foundation to promote the values of tolerance, respect and appreciation of differences. Through education and inspiration, the foundation seeks to end racism and prejudice. As its motto goes, “Racism is a grown-up disease, and we must stop using our children to spread it.”