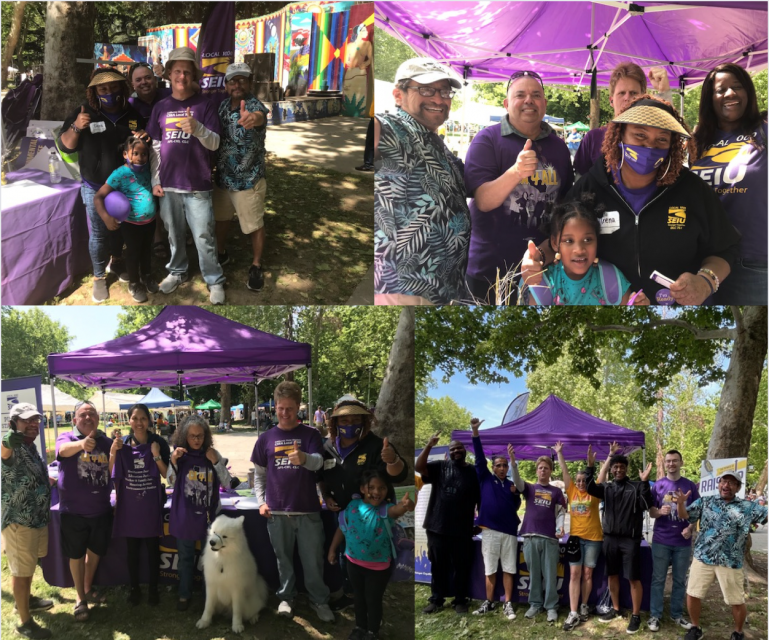 On Sunday April 24, 2022, the SEIU Local 1000 Environmental Committee participated in the Sacramento Earth Day event at Southside Park, Sacramento. Sacramento Earth Day is the largest Earth Day celebration in the region, providing people with the knowledge and means to take care of our planet. The theme this year was In This Together. The event was free and thousands of attendees were expected throughout the day.

The purpose of the SEIU Local 1000 Environmental Committee is to provide a roadmap for our members to proactively lead the cause of environmental justice and activism within our communities, across California, and around the world.

Our goal in participating in the Sacramento Earth Day was to drive member engagement, develop non-member outreach, and facilitate community Involvement. Specifically, this event provided the committee the opportunity to:

The event also provided us with the opportunity to engage members in building their leadership by interacting with members, non-members, and the general Local 1000 community. The volunteers were a mix of seasoned Job Stewards and recent hires. All of the volunteers expressed a positive attitude that their Union was involved in environmental justice.

Over 30 individuals who came to the booth identified themselves as Local 1000 members. The volunteer members asked each of them to sign in and handed out Union t-shirts and other swag. Our volunteers also invited members who visited the booth to get more involved with their Union.

Our volunteers also had several opportunities to engage non-member represented workers on the value of union membership, and several responded by saying they would reconsider becoming a union member.