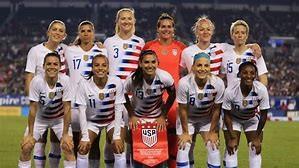 Celebrating the US Women’s Soccer Team

The US Women’s Soccer Team has won several world cups, including 2015 and now in 2019.  But that’s not the only thing these fierce women are doing.  They’re also leading the way for pay equity in sports. On March 8, 2015, they sued the United States Soccer Federation, claiming “purposeful gender discrimination.”

“The bottom line is simple,” said star defender Becky Sauerbrunn. “It’s wrong for us to be paid and valued less for our work because of our gender.” Captain Megan Rapinoe mentioned the responsibility the team feels to advocate “…On behalf of our teammates, future teammates, fellow women athletes and women all around the world.”

The team’s message is that they’re bringing in money for the League and for Fédération Internationale de Football Association (FIFA) and they’ve been winning.  Yet, they’re paid far less than their male counterparts, who achieved the same results in their league.  While their trailblazing may well lead to the first pay equity in sports, the team will undoubtedly be remembered for raising the bar for women in sports and women everywhere.